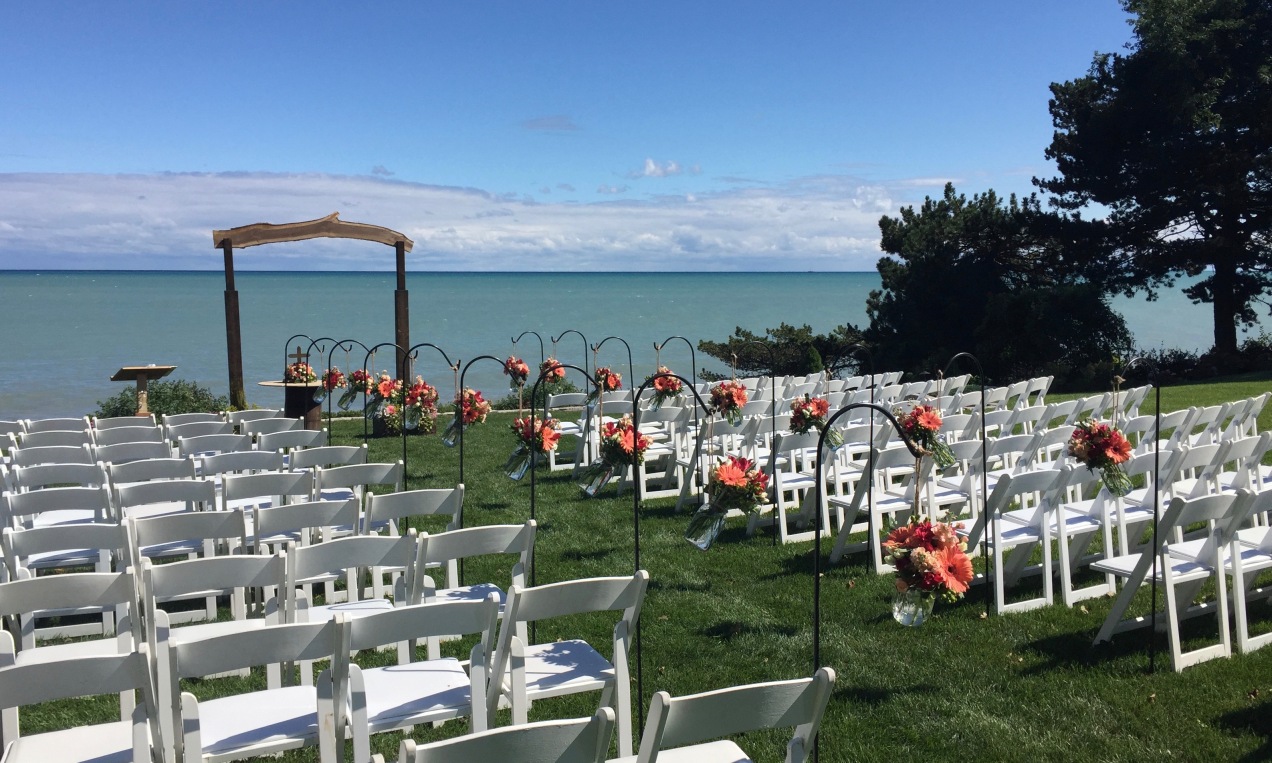 Actually, I think we’re all pretty clear that it’s not the Bears/Packers game that’s got me buzzed. I’m so tuned out to the world of sports that I’m feeling proud of myself for even knowing that the Bears and the Packers are playing today, which is nothing at all like the kind of excitement real fans are feeling — I know, because I’ve spent the last two days up in Wisconsin preparing for and then celebrating our friends Ryan and Rachel’s wedding. It was a beautiful ceremony and the love radiating out from the couple was palpable, but when Rachel’s father made a point of the fact that Ryan is a Bear’s fan during his toast, the sudden explosion of cheers and jeers made me think that we may want to say a prayer for that couple on game days.

The view of Lake Michigan from the scene of Ryan and Rachel Coffee’s wedding in Racine, Wisconsin.

Rachel and Ryan got married at the home of one of Rachel’s relatives, in a spacious backyard overlooking Lake Michigan. The weather was perfect: a sunny blue sky, a cool breeze, the sound of the waves washing the sandy shore. I joked with a couple people that there was no need for a sermon — all I needed to do was point to our surroundings and say, “Look, God’s creation proves God’s love for us!”

The apostle Paul makes a similar point in his argument about the sinfulness of human nature.  “Look,” he says, “what can be known about God is plain to them, because God has shown it to them.” (Rom. 1:19) He says “them” because he’s setting up a contrast between Jews and Greeks (so that he can later knock it down), but we might as well say “us” because the point he’s making is that God’s goodness and power are obvious in God’s creation, and that we hardly need scripture or divine revelation to observe that we are part of a created world that is fearfully and wonderfully made. “Ever since the creation of the world [God’s] eternal power and divine nature, invisible though they are, have been understood and seen through the things [God] has made.” (v. 20)

It occurs to me that this statement may make Paul the unwitting accomplice of all those people who say that they don’t need to come to church to encounter God, because they find God in the sunset, or at the lake, or in the mountains. “Yes!” I can hear Paul saying, “Precisely! We do not need church or religion to know that God is powerful and active in the world, because the splendor of creation testifies to that basic, foundational fact all day long!”

And, that is not why we gather for worship each week. We are not here because we think God is trapped in this cage, waiting for us to come visit, like the lion at the zoo. We’re not here because we went down to the lakeshore, but we just couldn’t find God. We’re here because we know that we have sinned and fallen short of the glory of God, but that in God’s mercy and compassion we are forgiven and set free to share in the work of healing and reconciling a planet and its inhabitants that are groaning under the suffering caused by so much human greed and negligence.

The reality of sin is distasteful to the culture at large, I think, mainly because it is so wrapped up with experiences of shame. For many people, even hearing the word “sin” shuts them down. It may be that some of you are already feeling shut down right now, hearing me talk about sin from the pulpit. If that is so, I ask you to try and keep an open heart and open mind for just a little while longer.

In our world, it is often the case that if we admit we are in the wrong, we expect to be embarrassed in front of our classmates, punished by our parents, humiliated by our friends, dismissed by our colleagues, divorced by our spouses. If we admit that we make terrible, terrible mistakes then we expect to be abandoned. We are not trained for grace. We do not have enough experience with forgiveness. We are merciless because we do not expect mercy.

Why do people go to church, the logic goes, just to be made to feel bad about themselves? I don’t need help feeling bad about myself, I need to surround myself with positivity.

I turn 42 next month, so it’s time to schedule my annual physical. Every year my primary care physician looks at my height and weight, and asks me how many times a week I’m getting 30 minutes or more of exercise that elevates my heart rate. He reminds me of the facts: that regular exercise and a healthy diet will reduce my risk of heart disease and stroke and that I’ll have a much higher quality of life if I make even small changes to my lifestyle. I don’t ever tell him, “what a downer! I don’t know why I even bother coming to you each year, I need more positivity in my life!” Because I know that what he says is true, and that he’s not interested in shaming me, but instead that he’s encouraging me to become an actor in the story of my own healing and wholeness.

Paul says, “So we are without excuse; for though we know God, we do not honor God as God or give thanks to God, but we have become futile in our thinking, and our senseless minds have become darkened. Claiming to be wise, we have become fools; and we have traded the glory of the immortal God for images resembling a mortal human being …” (Rom. 1:20-23)

Like a doctor speaking a hard truth to a patient, Paul puts us all on notice with a diagnosis delivered two thousand years ago that has only been confirmed with the passage of time. Although we can see the evidence of God’s goodness and power in the splendor of creation all around us, we have become so preoccupied with ourselves that we have traded the worship of God — which pursues unity and reconciliation out of gratitude for the goodness of the gift of life God freely gives — for worship of ourselves — which encourages division and self-interest in an attempt to secure for a few those things we all require for life. We betray God’s abundance by creating scandalous poverty, even as we pretend that there are no limits to what we can extract from the earth, or the ocean, or the land.

But God, whose face is seen throughout creation — in the mountains, under the big sky, has also worn flesh like ours and has wrapped the living Word in frail humanity so that all creation could be made new. As bleak as the present moment is, environmentally speaking, we remember that God’s Word, God’s life, God’s light is not overcome by sin, or by ignorance, by fear, by greed, or by despair. God keeps coming and coming for us, inviting us to embrace the truth not because it will shame us, but because it will set us free. 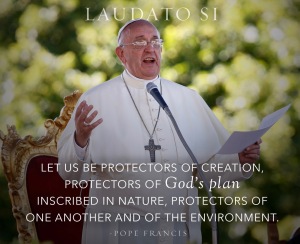 With Pope Francis’ visit to the United States just over a week away, I’ve been drawn to read his most recent encyclical on the environment, Laudato Si (which is Latin for “Praise be to you,” drawn from the beginning of Francis of Assisi’s canticle). I’d like to invite you to read the Pope’s letter to the church with me throughout this Season of Creation. The document is a beautiful interweaving of the science of climate change, the human roots of the ecological crisis, the political and economic realities of poverty and global inequality, and the resources of Christian faith and life that culminate in a call to action on behalf of our fragile planet. Laudato Si is available online for free (and I’ll include the link in my sermon when I post it later today) and I’ve set a few copies out in the narthex for those who may not have access to the internet at home.

Near the end of that document, Pope Francis draws a connection between our worship and the created world. He writes,

“[The Lord’s Supper] joins heaven and earth; it embraces and penetrates all creation. The world which came forth from God’s hands returns to [God] in blessed and undivided adoration: in the bread of the Eucharist, ‘creation is projected toward divination, toward the holy wedding feast, toward unification with the Creator[’s own self].’ Thus, [Holy Communion] is also a source of light and motivation for our concerns for the environment, directing us to be stewards of all creation.”

Yes, God is present in the sunrise, at the lakeshore, in a grain of sand … and God is also present in these bits of created matter — in bread and wine that we can only receive when we are together, which is also (not un-coincidentally) the only way we will survive this crisis: together, in restored communion with one another that requires a restored relationship to the earth. Our unity, demonstrated in the sacraments, but imparted to us as a gift freely given, removes shame’s threatening loneliness and replaces it with the solidarity that comes from a deep and abiding knowledge that we belong to each other and to the earth, our sister, our home.

Praise be to you, our Lord!