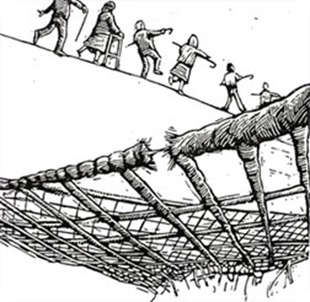 In the reading for Acts assigned for this Sunday, Paul and Silas encounter a young slave girl whose illness is being used for profit by her captors. When they heal her of the spirit that possesses her, the girl’s owners have the two thrown in prison for disrupting the social order. But from the confines of their prison cell, Paul and Silas begin to worship God with such power that the prison itself is shattered, and the guard assigned to watch them prepares to commit suicide rather than face the punishment for allowing them to go free. The apostles, however, stay put and witness to the jailor their faith in God. He is so moved by their actions, that he and his entire family are baptized at once.

This weekend is also the one designated by the Faith Caucus of the Campaign for Better Healthcare (CBHC) as “Sound the Alarm” Sunday. CBHC statistics indicate that there are 1.8 million citizens in the state of Illinois alone who live without healthcare. While the recently passed federal legislation will provide coverage to millions of Americans, there is still a real need to make sure that healthcare reform is implemented justly in our own state.

For too long, those without insurance have been held captive to a profit-driven culture. We are thankful that through prayer and public action, the walls of this prison have begun to crumble. But as those walls begin to fall, we cannot flee the scene of the disaster. Instead we are called to stay put, to continue making our witness, until even those who were held responsible for enforcing the former system are set free. We cannot cease to advocate for healthcare reform until we are all the same side – until we are all by each other’s side!