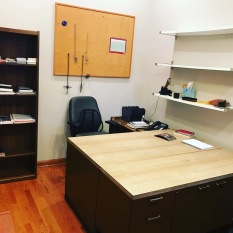 We’re getting close to the end, can you feel it?

In both Paul’s letter to the Romans and Matthew’s account of Jesus’ ministry, the end is coming into view. For Paul, this takes the shape of what sound very much like parting words, “Let love be genuine; hate what is evil, hold fast to what is good; Love one another with mutual affection; outdo one another in showing honor” (Rom. 12:9-10) and so on. In Matthew, the inevitable end is the cross but when Jesus begins to speak plainly about it, Peter demonstrates a certain level of denial about what Jesus has been doing and what it will cost him. 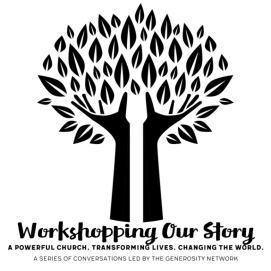 Coincidentally, perhaps, St. Luke’s is in a very similar moment. By now you’ve heard the announcements, you’ve gotten the postcard encouraging you to sign up for a pair of dinner conversations, and in just a few weeks now you’ll begin “workshopping the story” of just how it is that St. Luke’s proposes to be a powerful church that transforms lives and changes the world. The conversations you have in these small groups will shape the narrative that will become the basis for your 2018 budget — which is another way of saying, what you are doing and what it will cost you.

When Jesus gets clear about what he is doing and what it will cost him, he begins to describe the inevitable conflict that will occur in Jerusalem when he brings his life-giving, liberating message of divine love to the local seat of imperial power. He fully understands that his ministry will raise tension and unmask the ongoing violence between the empire and the colonized in such a way that the system of domination will use every tool at its disposal to end the conflict quickly. For the Roman Empire in the first century, this meant crucifixion.

It’s absolutely important to understand this because, without this understanding, Jesus’ words to his disciples, “If any want to become my followers, let them deny themselves and take up their cross and follow me,” sound like an encouragement to passive acceptance of pain and suffering in their lives. I can’t count the number of times I’ve heard people say something along the lines of “we all have our crosses to bear” as a way of saying “life is hard and painful.” That is not what Jesus is saying. Jesus is not asking those who follow him to resign themselves to lives of chronic pain and crushing burdens.

Instead, Jesus is asking for something much harder. Jesus is asking the disciples to examine their lives and discern the ways that life under the empire has forced or enticed them into settling for something less than their full humanity. Jesus wants those who follow him to get clear about what is at stake for them in the upcoming conflict, to know their own story of oppression so that they can maintain the resolve to struggle for their own liberation. Jesus acknowledges that the empire has more than one tool at its disposal when it comes to keeping us in line. It can threaten us with the cross, or it can buy us by offering us access to the goods it unjustly extracts from others. Speaking to this dynamic, Jesus asks, “For what will it profit them if they gain the whole world but forfeit their life? Or what will they give in return for their life?” In other words, how much is your life — your integrity — worth? What’s your price? 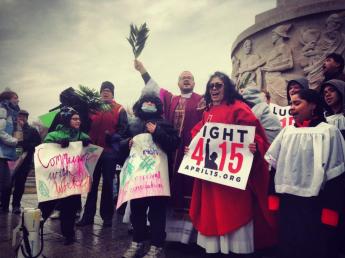 If you were with us on Palm Sunday two years ago, then you’ll remember how we stood with fast food workers in the fight for a living wage, the #FightFor15. For most of us, this was not an act of taking up our cross — it was an act of solidarity with those whose livelihoods were actually on the line, those who’d taken stock of how the machine of modern day empire was getting rich off their backs, and who’d gotten organized so that they could confront the system of domination that extracted wealth from their labor without paying them enough to buy food, cover rent, and pay for their families’ healthcare and other needs. The workers whose hands we blessed, who served us holy communion and then marched with us to the McDonald’s where those same hands served fast food to nameless consumers day after day, understood that they might lose their jobs in this fight, that something was at stake for them, but they were not swayed from their goal.

Part of what it means for St. Luke’s to be a powerful church that transforms lives and changes the world is a commitment to helping each member of this community begin to see more clearly how the current arrangement of power and wealth has harmed each one of us, has diminished our fullness of life, has compromised our integrity, has purchased our complacency and our complicity. One of the ways that has happened in the last year is through the public faith trainings that Erin led, and will lead again in the fall. The outcome of community organizing done well is that we each get in touch with our own story of oppression — and, yes, I mean each of us, because there is no way of life under the system of domination, what we used to call empire but which now goes by other names, that escapes oppression.

Fundamentally, empire divides and conquerers. So capitalism not only harms workers, but the middle and owning classes as well. Racism dehumanizes not only people of color, but so-called White people as well. Sexism and gender oppression supply us all with painful, restrictive patterns for relating to our own bodies and the bodies of others. Nationalism creates false solidarity within invented borders at the expense of our neighbors, who are actually our siblings in the vast human family.

There are exciting times ahead for you, St. Luke’s. I can see it. Exciting and difficult, because you have heard Jesus’ call to take up your cross and follow and you have. You have and you will again. When it seems unclear to you just what that cross is, I encourage you to go back and read this passage from Romans again. As you listen to Paul describe what it means to live in loving harmony with one another, examine your life for the forces and influences, the stories and the histories, that make it hard for you to do so. There, in the tragic gap between God’s vision for human life and our experience of it, is the cross — your cross and our cross to bear together as we follow Jesus in a faith that demands everything and promises something even better in return: our humanity, redeemed and restored.