Grace to you and peace from God our Father and the Lord Jesus Christ. Amen.

To begin, I want to say thank you to Bishop Burk and Pastor Colander, but especially to Stephanie and Krista and Rebekah for extending this invitation to preach to me. Rob had no lack of friends and colleagues who could have filled this role, so it was a great honor to be asked.

It also evoked in me just a little bit of test anxiety because, you see, it was Rob who confirmed me as a 9th grader almost 30 years ago back in the fall of 1987 after coaching my class through Luther’s explanation of the Ten Commandments, making us memorize the Apostle’s and the Nicene Creed, and requiring that we construct our own individual statements of faith. As you all know, he later went on to serve as the Lutheran Campus Pastor here in Iowa City where, for two decades, he left his mark on hundreds of young adults — a number of whom, like me, went on to become pastors. So, as perhaps one of the earliest of his students to follow in his footsteps, I feel like I am in some way standing in for all the students he mentored, paying tribute to his ministry and giving voice to the faith that he nurtured in us through the integrity between his words and his actions.

When Pam reached out to me earlier this week with the texts that Rob had chosen for his funeral, it was impossible not to notice that the passage he’d selected from Matthew begins with verses we hear on Ash Wednesday every year:

It’s fairly clear what “treasures on earth” refers to, followed by “where moth and rust consume and where thieves break in and steal.” Moths chew holes in expensive garments, rust consumes metal, thieves break in and steal whatever can later be sold. “Treasures on earth” are anything we can put a price on. We work so hard to store up a little bit of money to try and ensure that our futures will at least be safe and hopefully comfortable; but too often we mistake prosperity for a promise that the future is in our control. No such promise has been made.

Instead Jesus instructs, “do not worry about your life, what you will eat or what you will drink, or about your body” (v.25); and asks, “can any of you by worrying add a single hour to your span of life?” (v.27)

There’s a young couple in my congregation whose first child was born the morning after Rob died. At the beginning of the second trimester they received the devastating news that the wife’s father (also a Lutheran pastor) had been diagnosed with terminal liver cancer. It spread rapidly, and six weeks later he was gone. He never met his grand-daughter, whom I got to hold in my arms for the first time when she came home from the hospital two days ago, on Ash Wednesday. The parents, exhausted from the first of many sleepless nights to come, wanted me to come over. “Bring the ashes,” they said.

After reciting my favorite Irish blessing over little Anna I asked about the ashes, wondering how they would respond to this sign of our inescapable mortality only two days into their daughter’s life. “Do you want her to receive the ashes?” I asked. “Yes,” they nodded. “It seems right.”

So we prayed together, asking God to use these ashes to remind us of our mortality, not so that we might live our lives terrified of death, but so that we would be encouraged to wring every drop of joy out of the gifts of the lives that God has given us. “Anna,” I said, “our God is gracious and merciful, slow to anger and abounding in steadfast love” and “we are dust, and to dust we shall return.” I made the sign of the cross on her tiny forehead with dark ashes in the place where someday soon she will be washed with water and anointed with oil.

Death and life are always this close together, whether we can bear to acknowledge it or not. Rob did acknowledge it and he bore it with grace, wringing every last drop of joy out of all the things he treasured most: being out in nature, walking or on his bike; keeping up his correspondence with family and friends and former students, writing letters and then when that no longer worked, keeping tabs on us all via social media; but most importantly, time spent with his family: traveling with Stephanie, attending Rebekah’s graduation, being present for Krista and Paul’s wedding. These were his “treasures in heaven,” things on which you could never put a price, pointing to a reality which is so much more than a final destination, but a way of living that brings eternity into the present as we invest ourselves fully in one another.

Rob was fully invested. You could see it in his radiant smile. You could hear it in that unforgettable laugh. But you also knew it by the battles he fought and the places he put his body. He took a stand for LGBT justice and inclusion in the ELCA in the early years of the AIDS crisis, over 20 years before the denomination would finally catch up to him. He took students on mission trips to Nicaragua, cultivating an on-going relationship between Lutheran Campus Ministry here and the Youth Network Against Violence there to support their efforts to confront domestic violence and sexual exploitation in their communities. Both his love and his anger were righteous and rooted in the call of the gospel of Jesus Christ to proclaim all life as sacred and all people as God’s own people.

So we do not lose heart, even though right now we are still weeping, because we know that Rob’s resurrection, begun in baptism, has now been accomplished. Even as his outer nature began to waste away, he was already being transfigured from glory into glory as he experienced deepening levels of reconciliation, acceptance, and gratitude for the rich life he lived.

The apostle Paul writes, “we look not at what can be seen, but at what cannot be seen; for what can be seen is temporary, but what cannot be seen is eternal.” (2 Cor. 4:18) That has never made more sense to me than it did last night at the visitation, where many of us had the chance to pay our respects to Rob as his body lay in the simple casket he’d requested from the brothers at New Melleray Abbey up in Dubuque. This body that had been one of God’s greatest gifts to Rob, which he had used to bless those he loved with his presence, his touch. It was his face, his eyes, his hands, (his hats) that we could see — the temporary. But what we could not see — the smile that was never far from his lips, the mischievous intelligence in his eyes, the tenderness in his hands — is not gone. It is as eternal as the love that he held in his heart. 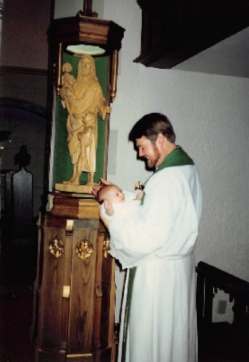 For if it is true that hearts follow after what they treasure, then Rob’s heart now beats in the world, and in you. For the rest of our lives we will hear it when we are walking in the woods, or biking the trails, or casting a line, or sharing a pint with a friend, or gathered around the new fire at the Easter Vigil, or holding children yet to be born as they meet God in the water or at the table. In those moments, and so many more, he will remain as real as the resurrection.