Has your love ever been offensive?

I ask because I’m trying to hold the various passages assigned for this morning together in some way. In Jeremiah we hear God reassuring the young prophet that God will be with the child as he delivers the Lord’s judgment against the nations. Luke’s gospel plays out like Jeremiah’s greatest hopes and fears as those who hear Jesus in the synagogue are first drawn to him in admiration, then so enraged by his interpretation of scripture that they are ready to throw him off a cliff.

But in-between these two stories comes the excerpt from Paul’s letter to a community in conflict, exhorting them to speak to one another in love. Everything is subordinated to love: the prophetic word, acts of charity, even martyrdom. No expression of faith is complete unless it is performed in love.

So then, what do we make of Jesus’ acts of provocation when he returns to the synagogue in his hometown? Where is the love in his agitation of the village that raised this child?

As a reminder, Paul’s letter to the Corinthians isn’t trying to account for Jesus’ behavior in Nazareth. It’s written to a different group of people experiencing a very different situation. And, as I explained a few weeks ago, even the lectionary which assigns readings for each Sunday isn’t trying to force a connection here. During these Sundays in the Time after Epiphany the second reading has been working its way through First Corinthians. The lectionary isn’t assuming any particular thematic resonance between the gospel story and Paul’s letter to the church in Corinth. So what I’m engaged in here is a minor act of constructive or systematic theology, trying to create a coherent biblical worldview out of disparate scriptural materials.

It’s just curious to me that right next to two stories about young prophets sent to deliver challenging messages to audiences set in their ways we also hear Paul’s reminder to root all our speech and all our actions in love. That’s what leads me to ask: has your love ever been offensive?

There are some obvious answers to this question. For all the years that I’ve been alive on this earth there’s been a conversation going on in the public square about which kinds of love are acceptable and which are not. Before we were preoccupied with love between people of the same gender we were just as preoccupied with love between people of different ethnicities. God forbid people of the same gender, and different ethnicities. To advocate for our own right to exist, to search after love, to find it and claim it, was deeply offensive to the majority of our neighbors. Until it wasn’t.

But not all love is romantic, surely. Are there other forms of love that give rise to offense?

In preparation for the book study we’ll be hosting during the season of Lent, I’ve begun reading Susan Thistlewaite’s “#Occupy the Bible: What Jesus Really Said (and Did) about Money and Power.” In it she argues that if we are going to build a faith-rooted movement for justice in our world, we will have to reclaim the power of scripture by learning to read it at “street level,” which is another way of talking about liberation theology. Rather than imagining our religious identities and traditions as stabilizing forces working hand in glove with secular culture to preserve the status quo, we are called to claim our inheritance as executors of a spiritual estate that helped end slavery, bolstered the women’s suffrage movement, sided with workers in the labor movement, fueled the Civil Rights movement, authorized the movement to end violence against women, cultivated the Farm Worker movement, and camped out with the #occupy movement. Her book reads like the word of the Lord commissioning young Jeremiah: “See, today I appoint you over nations and over kingdoms, to pluck up and to pull down, to destroy and to overthrow, to build and to plant.” (Jer. 1:10)

But can that work — the work of reforming a world that is stacked against the poor, the weak, the undocumented, the elderly — be done in love? If so, how does that change our notions of love, how it looks and sounds? 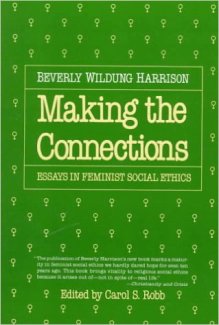 In her ground-breaking essay, “The Power of Anger in the Work of Love,” Christian ethicist Bev Harrison writes,

“Anger is not the opposite of love. It is better understood as a feeling-signal that all is not well in our relation to other persons or groups or to the world around us. Anger is a mode of connectedness to others and is always a vivid form of caring.”

That insight, that anger is a vivid form of caring that signals to us a tear in the fabric of our relationships with one another helps me interpret what I read as anger when I listen to Jesus’ exchange with the people of his hometown. After impressing them with his reading of the prophet Isaiah, he pushes through traditional interpretations of scripture to make an uncomfortable point: There were plenty of widows starving in Israel during the time of Elijah, but God sent the prophet to a foreigner instead. And there were plenty of lepers in Israel during the time of Elisha, but God sent the prophet to heal a foreigner instead.

As we wrap up our three week series of testimonies organized around the theme, “Immigrants and Refugees, Strangers and Aliens” we have been challenged to remember that the God of Epiphany, who is a light to nations, does not claim any one nation as God’s own. Instead, God is always reaching out to all of us through the stories of people who share our common humanity, but whose lives are so very different from our own. That truth seems fairly innocuous until it rubs up against the way power and wealth have been arranged in the world. Until we insist that it should affect how we talk about poverty and taxation, how we should talk about housing and urban planning, how we should talk about immigration and border security, how we should talk about war and foreign debt relief, how we should talk about our enemies and national security.

It’s not that Jesus has no love for the people of Nazareth, his hometown. It’s just that he’s been called and sent by the God of Jeremiah and Isaiah, the God who chooses all people as God’s people. And when that God looks at how we have divided ourselves from one another, God is angry. You hear it in Jesus’ tone. It is patient, but it is not passive. It is kind, but it is not accommodating. It is not arrogant, but it is insistent. In Jesus we see and hear the power of anger in the work of a love that in the end does in fact bear and endure all things so that we might believe all things and hope for that which we thought was impossible.

On some level, I guess, all love is offensive — because love treats others as if they were of equal significance as us ourselves. Love transforms others from objects into subjects. In a world that is constantly tempting us to consider our own needs first, that celebrates greed and consumption, love is the only force that can disarm our hyper-vigilance and call us down from the guard posts on the walls that divide our nations, our cities, our hearts.

The bible is filled with these stories, stories of love and anger, stories of commissioning and sending, stories of children who are prophets and preachers who are peace-makers, stories of God’s offensive love. Stories that make a claim on us, and require us to sit with them, read them, inhabit them, occupy them, until we can claim them as our own.