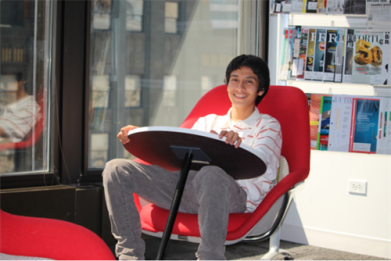 Let me tell you about a young man named Jesús.  Not the baby in the manger. Not the “reason for the season.” Jesús Velazquez, a high school student and youth activist here in Logan Square.

Jesús and his family came to Chicago when he was a toddler. Growing up, he struggled to stay motivated in school. As he moved into high school and the pressure to focus on the streets over his studies got more intense, he found an outlet for his frustration with Chicago’s public schools, which he describes as “under-funded and poorly resourced.” Through the citywide After School Matters program Jesús got involved with the Logan Square Neighborhood Association, where he met Liliana Díaz, a youth organizer. Finding his place in a community of young people organizing for positive change here in our neighborhood and across the city, Jesús began to flourish. Liliana describes his leadership like this, “he steps up to help make other young people see what he sees. It’s hard to talk to young people about programs that are organizing-based. He explains to them in ways that make them more relevant to our youth.”

Together with other young people, Jesús organized to reform harsh “zero-tolerance” disciplinary regulations to keep his classmates in school with restorative justice practices that prevent students from getting expelled and landing in the school-to-prison pipeline. He has worked on campaigns related to deferred action for childhood arrivals to the U.S. (known as DACA relief, a significant early step in the much-needed on-going process of immigration reform), and temporary visitors driver’s licenses for undocumented immigrants.

Through this work he has discovered a sense of his own power, and subsequently a passion for organizing. Selected to represent our neighborhood as one of only four youth at the citywide “Generation All” initiative to create a plan for high quality public education in every Chicago neighborhood, Jesús has now worked with teachers’ unions, educational non-profits, the Chicago Public School district, and the Mayor’s office. He has sat on local policy panels and spoken at national conferences. Both his peers and the adults who have the privilege of working with him describe him as “brilliant,” “articulate,” and “deep.”

And, he still struggles in the classroom.

The gospel of Luke tells the story of another Jesús, this one did have a manger in his past, a season for which he is the reason. A Palestinian Jew living under Roman occupation, he did not have a privileged upbringing. He did not enjoy the benefits of a formal education. But his family respected tradition and took him to Jerusalem each year to celebrate the Passover with relatives and other countrymen.

It’s the only story we get of his childhood, so we try to wring meaning out of every detail. For instance, given that it’s the only glimpse into Jesus’s childhood offered in the canonical books of the bible, why tell this one at all? What was the writer of Luke trying to signal to the earliest audience?

When you think about how many of the stories about Jesus as an adult focus on his conflict with priests and scribes and authorities of every sort, it’s kind of remarkable that the picture offered of his youth paints him in a rather studious, even dutiful light. One explanation that’s been offered suggests that the community for whom the Gospel of Luke is the intended audience is in conflict with other Jewish communities over the issue of traditions. By the time this gospel was written, the Temple had been destroyed and the early Christian church was actually part of a complex set of Jewish responses to that world-shattering event. While some forms of Judaism had been obliterated by the destruction of the Temple, other forms were finding new ways to reinterpret the faith. Pharisaic Judaism, an expression of Jewish religious identity that pre-dated the destruction of the Temple, had always emphasized the moral and ethical dimensions of Jewish life over Temple worship and sacrifices. With the temple now gone, Pharisaic Jews offered a way forward by keeping faith with the past through careful observance of the law and traditions.

Christianity, on the other hand, was a kind of messianic Judaism which responded to the destruction of the temple by asserting that with the arrival of the messiah, a new epoch had begun, an era marked by the end of divisions based on gender, rank, nationality or other social statuses. A time when the old concept of “chosen people” had been broken open to include all people.

These two approaches to Jewish life after the loss of the temple each had much to commend them, and they weren’t mutually exclusive. It was not only possible, but practical, to continue keeping the law and observing tradition while allowing innovations in religious identity to continue to emerge; inviting new, previously excluded people and communities into the fellowship. But, human nature being what it is, people quickly fell into camps that became antagonistic toward one another, driving the Pharisaic Jews and the messianic Jews (which was the emerging Christian community) further and further apart.

So this story of the young Jesus becomes a little bit more interesting. Here is the young messiah, the standard bearer for one side of the growing conflict, sitting among the teachers of Israel, the epitomes of Jewish teaching and wisdom, and what is he doing? He is listening to them and asking questions! 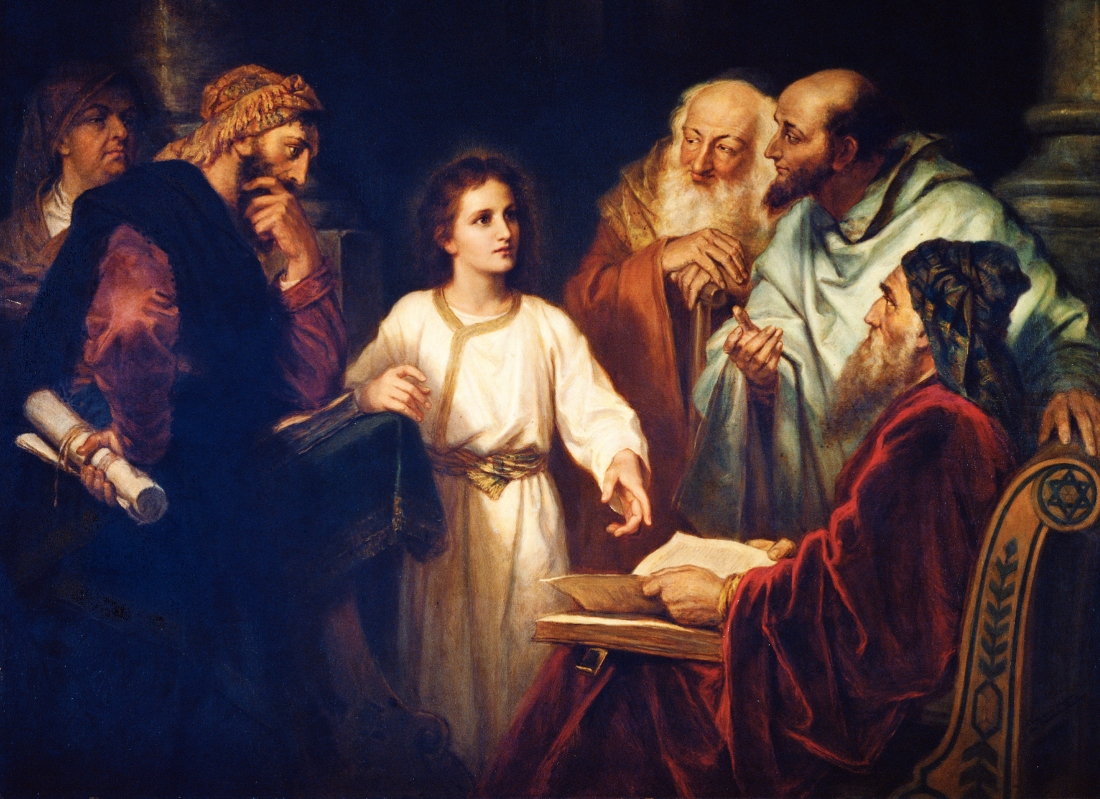 When I was growing up in Des Moines, the congregation I belonged to had a huge reproduction of a painting by the 19th century German artist Heinrich Hofmann of the Boy Jesus in the Temple. There in the center is a young, very white, Jesus dressed in a white robe like the one Hannah would make for the boy-prophet Samuel each year. A soft nimbus of light surrounds his head as he looks directly, but kindly, into the eyes of a seated priest. Jesus points at the scriptures that sit open in the teacher’s lap, as if explaining them to him. All around him are the old Jewish men in the Temple, gazing at the boy Jesus in wonder.

The painting was placed at the bottom of the stairs that led from the Sunday School rooms to the sanctuary. I never really thought about it, but I supposed the intended effect was to communicate to us children that we were valuable, central even, and that we had something to teach the church. Or maybe it had nothing to do with that at all. Maybe it was just the only wall on which that painting fit, and the trustees had to do something with it after it was donated. Who knows? But it’s my sermon, so I can tell the story however I want.

In any case, I think the painting gets it wrong. As kindly as the boy Jesus in Hofmann’s painting seems to be looking into that old Jewish man’s eyes, there is a kind of confrontation taking place. The young messiah is showing the old teacher up. A challenge is being presented. A changing of the guard taking place.

But look at the text again, and see what it really says:

“After three days they found Jesus in the temple, sitting among the teachers, listening to them and asking them questions.” (Luke 2:46)

We know that the traditional posture for teaching was seated. So, the scripture describes Jesus as having taken the posture of a teacher — but also as a teacher among other teachers. Furthermore, he isn’t described as delivering an insightful lecture, or a rousing sermon, but as “listening to them and asking them questions.” He values what they know. He is open to learning from them and being changed in the process.

Speaking from personal experience I can tell you that good attention, the ability to listen well to another person, is a resource in short supply. As someone who’s been trained to offer a listening presence to others I have found it to be the case that, more often than not, if I start listening people will grab hold of that attention and begin to share some of their most personal stories, their most deeply held convictions, their most urgent questions, almost immediately.

I myself am hungry for good attention. So, as soon as people begin to share their stories with me what almost always happens is that I hear elements of their life that remind me of elements of my own life, and I want to break in and tell my own story. It’s very natural, but it’s not good listening. The real art to listening is the ability to notice that response rising up in you, the desire to tell your own story, to honor that desire and then to set your story aside so that you can continue to offer the gift of your attention to the other person. It sounds easy. It’s not. Again, most of us are so hungry for real attention, quality listening, that we will keep trying to take it wherever we can.

The unfortunate result is that we keep talking at each other instead of listening to each other, which leads to the kinds of polarized conversations we now see taking place on the national stage as candidates compete to get as much attention as possible, with very little listening to the voices and the needs of real people taking place.

Which is why I find the story of Jesús Velazquez so exciting and inspiring. He is learning at a very young age the art of organizing, which is really the art of listening. With each conversation, with each one-on-one, he is collecting the stories of his classmates, his neighbors, his fellow citizens (and non-citizens). The more he listens, the better his questions get. The better his questions get, the more useful the stories he hears. So that even if he still struggles with math or science or whatever other subjects he find difficult, he is mastering the art of building community, which takes place one story at a time. He is acknowledged by the adults around him as wise beyond his years.

That is the kind of wisdom the world could use more of right now. The wisdom of listening. It’s the kind of wisdom we ourselves will need in the coming year, as we move further and further from the temple we have known out into our rapidly changing neighborhood. How will we balance respect for our history and traditions with the need to break open our boundaries even further, to welcome people and communities who’ve felt excluded from our fellowship? More importantly, how will we do this without creating competing camps, reinforcing old conflicts?

It will be by listening to each other. By honoring our own need to be heard, but balancing that with the decision to offer the gift of our attention to one another. If we can do that — as we practice doing that, we may discover, or remember, that all our stories have so many more points of connection that we’d imagined, and that our future will be found as we take our place in the circle of teaching and learning, opening ourselves to being changed by the process.