“In the fifteenth year of the reign of Emperor Tiberius, when Pontius Pilate was governor of Judea, and Herod was ruler of Galilee, and his brother Philip ruler of the region of Ituraea and Trachonitis, and Lysanias ruler of Abilene …”

There’s a reason Luke’s gospel is my favorite. While Matthew begins with an extensive genealogy tracing the line from Abraham to David and from David to Joseph; while Mark skips all reference to a backstory and begins with John the baptist out in the wilderness proclaiming the coming of the Lord; while John gives us beautiful poetry identifying Jesus Christ with the eternal Word, present from the foundations of creation — Luke gives us a roll call of the rulers of the empire, what community organizers might call a power analysis. Luke tells us who the emperor was, who the governor was, who the mayor was, and names of his relatives who’d also gained power through his patronage.

There is a wounded animal living inside my heart these days that wants to latch on to the gospel of Luke’s strategy of calling out the names. Who are the faces of empire here at the end of 2015? What are their names? Who are the heads of state, the governors, the mayors, we can hold accountable — for all of it. For the state budget crisis dragged out this whole year. For the culture of brutality and conspiracy that almost covered up the killing of LaQuan McDonald. For the climate talks that are already too late and still not enough. For Colorado Springs, for San Bernardino, for mass shooting after mass shooting with no progress in sight, only promises to pray. Give me names, so I know where to lay the blame.

Since many have undertaken to set down an orderly account of the events that have been fulfilled among us, just as they were handed on to us by those who from the beginning were eye-witnesses and servants of the word, I too decided, after investigating everything carefully from the very first, to write an orderly account for you, most excellent Theophilus, so that you may know the truth concerning the things about which you have been instructed. (Luke 1:1-4)

The gospel of Luke addresses itself to someone named Theophilus — whose name means “friend of God” — someone who has been instructed in the faith, and is now learning the whole story. Then, instead of giving us a poem, or a genealogy, or a baptism at the river Jordan, the gospel of Luke gives us the story of Zechariah the priest, whose song we have already sung this morning.

In Luke’s story, Zechariah comes to the temple to perform his family’s duties: to light the incense and offer the prayers. He and his wife, Elizabeth, were righteous people, blameless before God, but they had no children and they were both of an age where it looked like they might never see that dream fulfilled.

One day, a day like today, as the people were praying together, Zechariah was visited by a messenger of the Lord who told him that his prayers had been heard and were being answered. Elizabeth would bear a son, who would be named John and would be filled with the Holy Spirit. He would turn the people of Israel back to their God, and prepare them for the immanent reign of God.

But Zechariah could scarcely believe such a thing and he asked, “How will I know that this is so? For I am an old man, and my wife is getting on in years.”

The messenger replied, “I am Gabriel. I stand in the presence of God, and I have been sent to speak to you and to bring you this good news. But now, because you did not believe my words, which will be fulfilled in their time, you will become mute, unable to speak, until the day these things occur.” (Luke 1:19-20)

And it was true. Zechariah did not speak again until after Elizabeth had become pregnant, after Gabriel made a second stop to share similar news with a young girl named Mary, until the moment of his late-born child’s birth. It was not until eight days after the child’s birth, when he was brought to be circumcised and they were going to name him Zechariah, after his father, that he finally spoke. Elizabeth had said, “no, he is to be called John.” But the family argued with her saying, “none of your relatives has the name John.” Zechariah took a writing tablet and spelled out the name, just as he’d heard it from Gabriel: “His name is John.” And at that moment his tongue was loosed and he was able to speak once more. 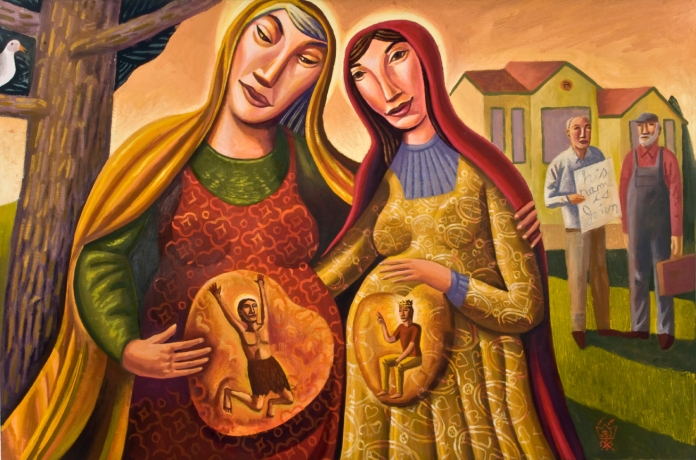 The words that spilled from Zechariah’s mouth after months of silence blessed the Lord and proclaimed God’s faithfulness — even in the moment of oppression, even in the shadow of empire, even surrounded by death. Zechariah’s silence gave him the gift of a new sight, as he watched new life fill his aging wife’s body, and joy return to her heart. From the distance of his silence, he saw young Mary and old Elizabeth sharing the wonders of the miracles happening through them, and he heard the girl sing a song envisioning a day when the mighty would be cast down from their thrones and the lowly lifted up.

So when Zechariah finally opens his mouth, it is not to name the forces of destruction that had laid waste to his community. It was not to lay blame at the feet of those in positions of power. It was to give thanks for the assurance of new life, new life that precedes any rational hope that this world could ever be made new. Zechariah sings a song of confidence that God has not forgotten God’s promises to be with us and to save us.

Then Zechariah turns his attention from those who’d gathered round to witness the miracle of his speech, and he addresses his infant son,

And you, child, will be called the prophet of the Most High; for you will go before the Lord to prepare his ways, to give knowledge of salvation to his people by the forgiveness of their sins. By the tender mercy of our God, the dawn from on high will break upon us, to give light to those who sit in darkness and in the shadow of death, to guide our feet into the way of peace. (Luke 1:76-79)

And the church has been teaching this song to its children ever since. Every Theophilus, every “friend of God,” every student of the way of Jesus Christ, hears these words: “you will go before the Lord to prepare [the way], to give knowledge of salvation to [the] people, by the forgiveness of their sins…to guide [their] feet into the way of peace.”

The gospel of Luke does begin with a power analysis, and it shares the names of those with the power to change the world right at the very beginning. Not Tiberius, or Pilate, or Herod, or Philip, or Lysanius. But Theophilus, and Zechariah, and Gabriel, Elizabeth, and Mary. This is why it is my favorite, because it begins with us, giving us song after song to sing.

As I said last week, at the beginning of Advent, the church’s New Year, the subversive message of the gospel is that the new creation begins with hope, with anticipation, with the silence that precedes the Word. The world we are waiting for will not be legislated into existence, it will be believed into speech. It will be patiently coaxed from us, one testimony at a time, until all our mouths are opened and all our tongues are singing the glories of the God who does not abandon us, who is the light amidst shadows deep as death.