Nancy has worked at McDonald’s full-time for the last ten years. She makes $8.25 an hour and has never received a raise, which means that even working full-time she lives below the poverty line. As the mother of two, to say it’s difficult to make ends meet is an understatement. It’s nearly impossible. So when Nancy noticed the help line advertised in McDonald’s employee newsletter, she called looking for resources for her and her family.

We’re all familiar enough with how big business operates in this country to not be shocked by what happened next.  Nancy described her situation to the help line operator, saying that she’d begun rationing food because there wasn’t enough to feed her family. The operator offered to connect her to a listing of all the food pantries in her community and asked if she was on SNAP, the federal government’s food assistance program for low-income families. When Nancy said that she also needed help paying for medical bills, the McDonald’s helpline suggested she enroll for Medicaid.

We’re not shocked by these stories, not because they’re not shocking, but because they’re so common. We’ve heard the same story at Wal-Mart and other national chains. In the interest of creating a business friendly economy we’ve created one that is hostile to low-wage workers. An economy where a person can work full-time at minimum wage and still not be able to feed themselves and their family. Where one medical incident could make the difference between keeping things together and complete disaster.

What does it mean that we live in a society where the value we assign to the labor of our lowest paid workers isn’t enough to live on? Where 52% of fast food families are forced onto federal assistance to make ends meet? Where hard-working people are required to rely on the charity of their neighbors and corporations are allowed to grow richer and richer by passing along labor costs to the rest of society, which ends up subsidizing those cheap burgers and other products of the low-wage economy to the tune of $7 billion each year?

Throughout the season of Lent we have been talking about the covenants God has made with God’s people; beginning first with Noah and the flood, then last week with Abraham and Sarah.  This week we hear the story of God giving the law, what we call the Ten Commandments, to Moses at Mount Sinai.  The law was one more covenant, one more sign that God was binding God’s self to God’s people.

The law comes to a people who are in the process of reclaiming their freedom after generations of slavery in Egypt. Unlike Pharaoh’s laws, which establish regimes filled with physical and economic violence, God’s law is established in the context of the ongoing covenant between a loving God and a free people. It is a law that recognizes our tendency to make idols out of wealth and to treat people as objects in the pursuit of all that we desire. It is a law intended to humanize us rather than oppress us. 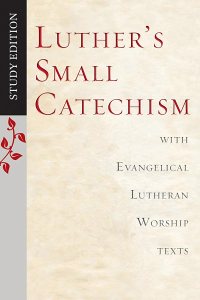 We have been given the law as a way to order and structure our life together, to tend the distribution of God’s good gifts among all of God’s people, and yet we deform the law and twist it to suit our own needs and ends without regard for the other.  God tells Moses to tell the people, “you shall not murder” and “you shall not steal.”  Luther, commenting on the fifth commandment (you shall not murder)  in his Small Catechism writes, “what does this mean? [that] we should fear and love God so that we do not hurt or harm our neighbor in his body, but help and support him in every physical need.”  And, of the seventh commandment (you shall not steal) he writes, “we should fear and love God so that we do not take our neighbor’s money or possessions, or get them in any dishonest way, but help him to improve and protect his possessions and income.”

And yet, we have created and sustained an economy of scarcity that rewards greed and violates both commandments in that it does not help and support our neighbors in their physical needs, nor does it help and improve their possessions and income. The situation is completely outrageous – reminding me of the bumper sticker that reads, “if you’re not angry, you’re not paying attention.”  The only thing that prevents us from acknowledging our anger and the injustice of the situation is the fact that we have become so accustomed to it.  But not Jesus.

When Jesus goes up to Jerusalem in the gospel reading from John we hear this morning, he enters the temple – the place where the people have been commanded to go to receive the blessings of God’s covenant of love – and sees that between the entry to the temple and the foot of the altar a marketplace has sprung up.  Merchants in the temple, acting with the knowledge and consent of the religious establishment, are taking the wealth of the people and converting it into “acceptable” gifts for offering in the temple.  Jesus is enraged – the temple should be a place where God’s people see and taste and experience God’s free and unconditional love, and yet even that gift has become commodified.  And so Jesus drives the money-changers, the profiteers, out of God’s house saying, “destroy this temple, and in three days I will raise it up.”

Sisters and brothers, you are the beloved people of God – along with everyone else.  Your lives are sacred and holy, they are a gift from God – and so are everybody else’s.  It’s not just the needs of our fellow Americans that we are called to address, but today we are challenged to look at the systems of power and privilege that we are a part of and that we have the power to change.  We are challenged to do this regardless of whether we consider ourselves liberals or conservatives, whether we vote Democrat or Republican, whether we voted for the current President or not.  We are called to do this because we are a part of the nation that stood at the base of Mount Sinai when God made an eternal covenant with us that requires us to care for the life and livelihood of our neighbors.

In his letter to the Corinthians Paul puts it somewhat polemically, “For while the Jews call for miracles and the Greeks look for wisdom, here we are preaching a Messiah nailed to a cross.” What I hear Paul describing is a third way between the poles of fatalism and rationalization. Rather than declare that “it would take a miracle to get us out of this mess” (a straw man characterization of Jewish political and ethical thought, to be sure) or philosophizing that this failed under-regulated free market experiment is the best of all possible worlds (though acknowledging that there are plenty of political and philosophical traditions that very effectively critique the corruption of capitalism), the Christian response to the scandal of the cross is to affiliate, to associate, to allow ourselves to be nailed in solidarity to those who hang with Jesus in places of unjust suffering.

And this is a consequence of our baptisms, in which we are joined with Christ and called to take up his ministry of clearing away anything in church or society that stands between the doorway where we sing “all are welcome” and the altar where we say “the gifts of God for the people of God.”  Whether we chose to be baptized or were brought to the font by our parents, our lives have been dedicated to the service of a living God that stands against every idol that would reduce us to mere cogs in the machine, mere servers on the line. Who liberates us from every oppression, and gives us a law that calls us to participate in the liberation of our neighbors. Whose covenant love is not just for us, but through us.