It is not difficult to see how alienated we are from the land, probably more in this generation than in any previous one. As a child I mowed the lawn and picked the occasional weed, but that was about it. My father, who grew up on a farm in Nebraska, would make some noise each summer about how I ought to spend some time on my cousins’ farm up in Minnesota and get a feel for what real work is, which sounded like a prison camp to me. As far as I was concerned apples, cheese and ground beef all came from the grocery store, and that was good enough for me.

The shift in my own family from farm to city is emblematic of not only a national but a global trend.  In 1950, when my dad was still a boy, 64% of Americans lived in urban areas. By 1980, when I was a boy, 74% of Americans lived in urban areas. Today, 83% of Americans live in urban areas. The United Nations reports that between 1950 and 2005, the urban population of the world more than tripled, from under 1 billion to over 3 billion. Or, to pull back even further, in 1800 only 2% of the world’s population lived in cities. Today nearly 50% of all the people on Earth live in cities. All of which is to say that as a species, we are living in a time of rapid mass exodus from the land and our sense of daily reliance upon it.

These facts make it harder, I think, for us to relate to the passage from Genesis, in which humanity is expelled from the Garden of Eden with the accompanying curse that we will be forced to endure back-breaking toil in order to draw sustenance from the land. The advent of factory farming technologies has subjugated the land in ways the authors of Genesis could never have imagined when they heard God’s call for humanity to exercise dominion over the earth. Instead I think we hear these other words from Genesis with new ears, “cursed is the ground because of you.” (Gen. 3:17)

With increased urbanization comes increased consumption. For example, urban populations consume much more food, energy and durable goods than rural populations. These patterns of consumption have been shown to actually change weather patterns around cities, and the pollution created by these massive centers of human congregation flow out from the city to the countryside through contaminated waterways that infuse the land from which our food is grown. So the curse pronounced upon the land returns to the ones whose actions initiated the curse in the first place, as Genesis says again “and now you are cursed from the ground.” (Gen. 4:11) 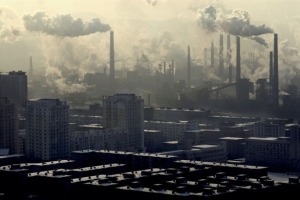 How has city life trained you to ignore the environmental consequences of your patterns of living?  Is it the gas consumed as you drive to and from work each day, refined from petrol pumped from the earth and shipped across the oceans? Is it the natural gas that heats your homes or fuels your kitchens, extracted from the earth by means of fracking? Is it the coal-powered electricity that runs the ever expanding array of household conveniences we plug into our walls, without imagining that the cost is measured in ways that stretch far beyond our monthly energy bill?

For me, it’s all these things and more. City life makes me a consumer. Because the food I eat, the energy I consume, the products I purchase all arrive to me in essentially the same way, at a checkout station in some shopping center, my relationship to the earth is reduced to acts of consumption. Gone is any sense of being co-created with the earth. Gone is any sense of being a part of the natural created order. Gone is any sense of kinship with the land as mother, with the sky as father, with the flora and fauna as sisters and brothers. It is all just product for human consumption whose value is determined by the market. In the end, the curse I lay upon the ground comes back to me, and my own humanity is diminished as I become nothing more than a consumer, another cog in the machine.

This is our present state of alienation, the state of being that Paul terms “sin” and describes as being under the dominion of death.  Paul goes on, however, to make the claim that even as death gained dominion over the earth by means of one person, Adam, that now a new abundance is available to us by means of one person, Jesus. This bold assertion requires some creativity, an act of imagination on our part, if we are to understand how the redemption we know by the name of Jesus might have any power to heal the land.

All our background and training inclines us to think of Jesus as the sign of our reconciliation with God in personal terms, or at most in collective terms confined to humanity as a species. Jesus is called Son of God and Son of Man, but not Child of Earth, though this little passage from Matthew opens our imagery up just enough to perhaps make that necessary leap, “so for three days and three nights the Son of Man will be in the heart of the earth.” (Matt. 12:40b) Some of the creeds we have inherited across the centuries imagine that Jesus spent the three days between the crucifixion and the resurrection in hell, or among the dead, but this little fragment simply states “in the heart of the earth.” What a rich image, to imagine that Jesus’ saving action begins not with humanity, living or dead, but with the land that first bore our curse. That Jesus, the seed that falls to the earth, begins the cycle of rebirth in the ground beneath our feet.

As a community that bears the name “body of Christ” and who imagines ourselves to be called by our baptism to be God’s hands and feet in the world, what might it mean for us to act in solidarity with Christ, who begins the work of healing and restoration with the very earth under our feet? For we, who so often conceive of Jesus in political terms, as the one who resisted empire and paid the price, what acts of resistance are required of us now? What price demands to be paid? What are we will to give up, or to lay down, to give new life to the earth? What cross are we willing to bear to be part of God’s saving intention for the creation God calls good, the creation that groans as it waits its own redemption?

Someday our lives will end, that is one of very few certainties we each share in common. When that moment comes, whether we have been transformed into ash or laid bodily in the earth, we will all find our resting place in the ground. We will return to the land. What an awkward homecoming that may be.

Or perhaps not. Perhaps we will find the will to amend our lives and restore to the earth the dignity of its heritage as one of God’s good creations. When she opens her arms to receive us at the end, how good it could be to hear Earth say, “welcome home, child. Welcome home at last.”