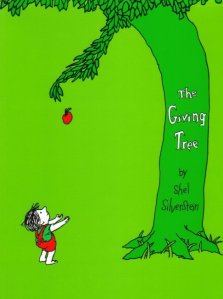 It’s been 50 years since the publication of Shel Silverstein’s The Giving Tree back in 1964.  How many of you have read it?  Did you know that Shel Silverstein grew up here in Logan Square?  Went to high school at Roosevelt, attended the University of Illinois.

The Giving Tree had a hard time making it to print.  Publishers thought it was too sad for kids and too simple for adults. Fifty years later it remains something of an enigma. Some people see in the story a parable about a mother’s self-sacrificing love for her child. Some see a story of narcissistic consumption. Some have called it a story of friendship, others a parable of Christ’s love. One reviewer called it a sado-masochistic fairy tale in which abuse is elevated to a virtue.

As we enter into the Season of Creation once again this year, a season in which we are encouraged to read scripture with a hermeneutic of creation or through the lens of God’s pronouncement at the end of each day that all that was made was “good,” I’m inclined to give the story a more straight forward reading as the tale of humanity and its relationship to trees.

The very fact that we might be inclined to read the story as an allegory for human relationships with one another, mother to child or friend to friend, shows how disconnected we have become from our sense of intimate interdependence with all of the rest of creation. The book of Genesis describes humanity and trees as coming from the same place,

Then the LORD God formed man from the dust of the ground, and breathed into his nostrils the breath of life; and the man became a living being … Out of the ground the LORD God made to grow every tree that is pleasant to the sight and good for food… (Gen. 2:7,9)

Like twins born of the same mother, humanity and the trees (which seem to stand in for all plant life) are fashioned from the same stuff. Furthermore, the author of this creation myth imagines that man was placed in the garden “to till and keep it.” (Gen. 2:15)  This sounds a little different than the creation myth that precedes this one, in which humanity is given dominion over the earth. Perhaps that’s why we give that other story precedence. Perhaps we prefer the idea of dominion over the more modest proposal that we simply take our place within creation as caregivers. 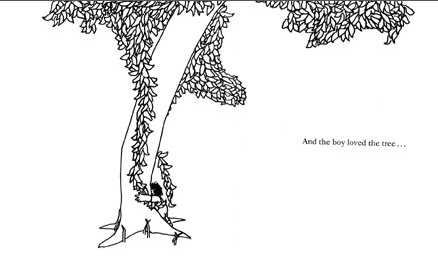 Shel seemed to retain that memory of common origins. At the beginning of his book the boy and the tree take delight in one another’s company. They play with one another, rest with one another, love one another. Anyone who uses these features as evidence of some deeper allegory really ought to spend more time watching children play outside. If you have, then you know that it’s perfectly normal to observe children taking deep delight in a tree, even loving one. 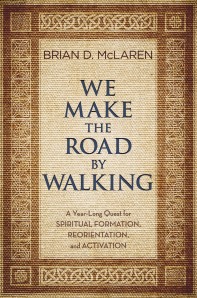 In his new book We Make the Road by Walking, Brian McLaren discusses the tangled roots at the heart of our environmental crisis. He reminds us that billions of dollars are spent every year making us unhappy, which is the first step in getting us to spend our money on the solutions being proposed. “Wish you had a brighter smile? Ask your dentist about Zoom teeth whitening!” Well, I didn’t realize I wanted a brighter smile, but now that you mention it… Over and over again, in a million little ways, we’re being told to find fault with ourselves and to spend our time and our money chasing after the new and improved.

But it’s not just our pocketbooks or our time with family that takes the hit when we spend long hours slaving away as we sell those apples to buy that house, or that boat. It’s the forests, and the land, and the air, and the oceans that suffer right along with us. There is no way to address the environmental crisis in which we now find ourselves without addressing the addictive and exhausting cycles of mass consumption that degrade not only our souls but the planet as well.

I should say, by way of a plug for some of our fall programming, that McLaren also believes that one of the great gifts of our Christian faith is that it offers us practices, daily and weekly and seasonal and annual disciplines, that are meant to re-humanize us, to fortify us in the face of so many destructive messages that push us toward consumption as the answer to all our problems. If that’s a conversation you’d like to dive into more deeply, I can offer you two options.  One is to join the adult forum for the next six weeks from 9am to 10am, where we’ll be using a series of short video clips based on Brian’s book to structure our conversations about Christian faith, practice and identity. The other is to head to the bulletin board in the back of the sanctuary after worship and sign up to be part of a small group that will be reading We Make the Road by Walking together. But more on that later…

I suppose I read The Giving Tree as both descriptive and cautionary. To the extent that it describes humanity’s relationship with trees and the rest of God’s creation pretty accurately, it is descriptive.  Like partners in a crumbling marriage, we have grown apart from the rest of God’s creation which we were given to love and to cherish, to honor and respect. But it’s a children’s book as well, which suggests that Shel was aware that a new generation might make a new choice. That the boys and girls we seat on our laps as we flip the pages might notice how sad that man grew to be, how lonely he looked as he sat slumped over on his amputated friend’s stump. That our children are strong enough and sophisticated enough to handle a story that doesn’t resolve neatly. That its haunting images might linger with them, they way they’ve lingered with you and me for fifty years now. That we might remember how much we have loved the trees in our back yard, on the trail, in the forests, around the world. That we might repent of our rampant consumption and return to our roots, that place where we remember that we and all the rest of God’s creation come from the same ground.

It’s been a number of years now since our friend Sally Levin had her funeral service here at St. Luke’s. I thought of her as I read Paul’s words to the Athenians from Acts,

The God who made the world and everything in it, [the one] who is Lord of heaven and earth, does not live in shrines made by human hands, nor is [God] served by human hands, as though [God] needed anything, since [God] gives to all mortals life and breath and all things. (Acts 17:24-25)

As her body gave way to the pancreatic cancer within her, Sally and I talked about how she would have wished that her funeral could have taken place outside, among the trees, where she loved to spend her days. She knew that the God who made her and loved her wasn’t locked behind the doors of the church, but in and throughout everything that grows up from the ground. She believed there was nothing we could build that could improve on what the Creator had already planted. Even as her body released its hold on life, her mind was already being renewed. She had a sense of that second birth that Jesus was trying to describe to Nicodemus, the being born that happens after we have grown old.

Since we could not hold her funeral outdoors, we decided to bring the trees inside, and as her friends entered the sanctuary on the day of her funeral they processed carrying fallen branches from the trees all around this neighborhood where she had raised her children, the same neighborhood where Shel Silverstein grew up. Who knows? Maybe even the same trees they had both loved.

As we move through this season of creation; as we chart the journey of creation, alienation, passion and new creation that is our story as Christians; as we reconnect and reconcile with our siblings — the forests, the land, the wilderness, and the rivers — we are invited to open our hearts and minds to the Holy Spirit, which is always reaching out, working its tendrils into the spaces between our past and our future to renew and restore us here and now.