As we continue to work our way through the book of Genesis this summer, this morning’s tale begins with rather ominous words. We left off last week with Abraham’s servant being sent to find a wife for his son, Isaac. This week that wife, Rebekah, is pregnant — but it’s not an easy pregnancy. Genesis says, “The children struggled together within her; and she said, ‘if it is to be this way, why do I live?’” (Gen. 25:22)

Suffering, and searching for answers, Rebekah turns to God in prayer. What she hears in response is hardly comforting however. God says,

“Two nations are in your womb, and two peoples born of you shall be divided; the one shall be stronger than the other, the elder shall serve the younger.” (Gen. 25:23) 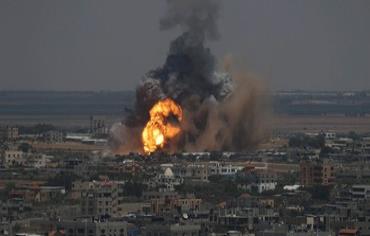 After a week like this past one, every preacherly instinct in me wants to stop right there and share with you my heartbreak over all the places in the world where two nations have been so deeply divided that lives are being lost like water being poured out over sand. In Israel and Gaza, where tensions have been rising again since the abduction and murder of three Israeli teenagers, bombs dropped by the Israeli Defense Forces over the last five days have injured over 850 Palestinians and killed at least 148, 70% of whom were civilians, many of them children.

Here in the United States we have been watching conflicts along our own southern border worsen, as children from points across Central America make their way north, fleeing poverty and gang violence that are due in no small part to U.S. drug policy both at home and abroad. With President Obama calling for billions of dollars of emergency funds to help speed up deportations of these children, and angry Americans staging protests and blockading busses filled with detained children, things will likely get worse before they get any better.

“Two nations are in your womb, and two peoples born of you shall be divided,” says God to Rebekah, reminding us that one of the functions of these stories from Genesis was to explain to the nation of Israel how it was related to neighboring peoples, and how those relationships fell apart. With people of every land and every age, we are left wondering the same thing.

The story continues with Rebekah giving birth to her twins, first to Esau, then Jacob. Jacob, the younger comes into the world grabbing at his elder brother’s heel, seeking to trip him up from the very beginning. Each boy is the favorite of one of his parents: Esau, a hunter and outdoorsman, is his father’s favorite; while Jacob, a quiet man who stayed close to home, has his mother’s favor. In a society in which power and inheritance flowed from father to son, it’s easy to see that Esau is being presented as the model of a man’s man. Furthermore, this family’s story has been dominated by the desire to establish a lineage that would fulfill God’s promise to make of them a great nation. Esau, son of Isaac, son of Abraham, seems like just the man to carry the family name forward.

But that isn’t what happens. Instead the story goes that one day, after coming in from the field, a hungry Esau asks for a bowl of the stew Jacob had been cooking. We’re told that Esau was famished, but not starving. There is no famine in the land yet (though one is coming). Esau’s life is not in danger. He’s a skilled huntsman who could have caught his own meal if things were that bad. When Jacob holds back the bowl of lentils, demanding Esau’s birthright, it’s hard to imagine that his athletic, older brother couldn’t have simply taken it from him, as older brothers are often want to do. So when Esau says, “I am about to die; of what use is a birthright to me?” I think we’re intended to hear his statement as hyperbole. These are brothers playing games with one another and, like so many family games, this one reveals the dynamics just under the surface.

Jacob wants his older brother’s birthright. You can imagine his resentment at being relegated to second place, coming into the world only minutes after Esau. He knows his father’s story, his grandfather’s story, his legacy and his family’s promised future. Those things matter to him. He wants to play a great part in their saga. Esau, on the other hand, seems indifferent to his inheritance, perhaps in the way that only the entitled can feel. It is his, he assumes forever, so it treats it lightly. He makes oaths he has no intention of keeping. He lives his life in the moment, assuming that what he needs will be provided for him.

This particular story from Genesis doesn’t seem to condemn Jacob or Esau, Isaac or Rebekah, it simply describes them. It foreshadows events to come, when this family dynamic will play out once again as Jacob and his mother conspire to steal Esau’s blessing from Isaac as the head of the house lays upon his deathbed. But here we are presented with a snapshot, the kind of story members of a family might tell years later when they look back, trying to understand when it all began to fall apart. 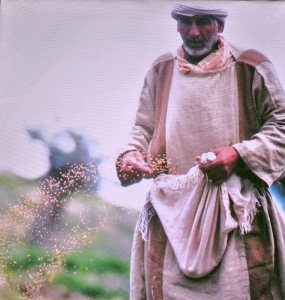 In the gospel reading for this morning we get the story of a very different kind of outdoorsman than Esau the hunter. Here Jesus shares a parable about a sower who goes out to plant his seeds, casting them rather indiscriminately onto the path, over rocky ground, among thorn bushes, and into good soil. Predictably, not all the seeds flourish. The seeds that fell on the path got eaten up by birds. The seed that fell on rocky ground grew fast and died fast, since it had weak roots. The seed that grew among the thorns got choked out. Only the seed that fell on good soil produced a harvest — but, oh, what a harvest! Enough grain to feed a multitude.

Jesus then explains his parable to those who’ve been following him. The seed is not God’s favor, nor God’s love. God may be like a parent, but in this story God is not picking favorites. Instead, the seed is “the word of the kingdom” or “the good news of the reign of God.” When that good news is announced, but we are unable to receive it, or can’t understand it, it does not take root. I suppose this could happen for any number of reasons. It may be that we are so preconditioned to look for another kind of kingdom, another kind of reign, that we can barely acknowledge our hope that the world as it is could be anything other than how we’ve always experienced it. The very idea is incomprehensible.

Then there is the the seed that falls on rocky ground. Quickly the plant shoots up, but just as quickly it withers. Jesus compares rocky ground to the person who is overjoyed to hear the proclamation of the gospel, who always knew that God meant the world to be different than this, who has longed to see God’s reign break through into present space and present time, here and now, but lacks that depth to sustain that hope when times get rough. Perhaps they’ve been waiting for a savior who would set the world aright without any call to conversion, without any demand of discipleship, without any cost. Or maybe they were longing for their own liberation, but less interested in the plight of their neighbor. Whatever the case, they are not able to sustain the life of faith, and so it withers before it can bloom.

Jesus describes a third maladaptive environment for the seed’s growth in our lives, when it falls among thorns. This, he says, “is the one who hears the word, but the cares of the world and the lure of wealth choke the word, and it yields nothing” (Matt. 13:22). Rather than greeting the news of God’s reign with joy, this person rightly understands that the kingdom of God is not the kingdom of this world, and that those who benefit from things as they are will likely lose much that they’ve grown to love before they taste the sweetness of the life God intends for us. On balance they are happier with things as they are, even as they suspect that their own wealth bears a cost that others pay.

I suspect Esau was in this third category. He was an inheritor of the promises of God, but he knew that his gain came at his brother’s loss, and that inequality grew to choke the love out of their relationship until the chasm that separated them was as high as any wall and as wide as any river. There they were, two brothers, born from the same parents, created out of the same love, yet divided like nations fighting over a blessing big enough for them both.

God is like a sower, with an infinite supply of seed, not rationing it out, not apportioning it only to those who have lived lives free from condemnation, not picking favorites, but casting it profligately, carelessly, over all kinds of ground, over all kinds of people, knowing that in the beginning these earthlings, formed from the dust of the ground, bearing the breath of God in their lungs, were gazed upon and called good. Knowing that each of us, in season, will be good soil again. And on that day, the seed will take root and grow into a harvest great enough to feed and bless all our brothers and sisters, of every land and nation, until our checkpoints and our border patrols fall and we are all sitting at the family dinner table again at last.

Praying for that day. Amen.