Do you remember that day? That O Happy Day? I remember that day last week.  My heart is still singing and my mind is still reeling from that day. This house was rocking and rolling to the sounds of praise and worship in celebration of the God of life, predictably showing up to do the unpredictable, to raise the dead. For many of us it was the kind of day when we felt like we could see with our own eyes, touch and taste with our own hands and mouth, the goodness of the Lord, present to us in word and water, in bread and wine. It was the day when the alleluias that had been locked up inside us for forty days were finally set free from the tombs of aching hearts and troubled minds, so that as we came to this cavernous sanctuary and found the stone rolled away and Jesus once again loose in the world, we were able to join with Mary Magdalene who left the tomb and returned to the rest of the disciples, saying “I have seen the Lord!” (John 20:18).

But not all who had known Jesus experienced what Mary and Simon Peter and the disciple whom Jesus loved experienced when they came to the grave that Easter morning. Not everyone who loved Jesus had come to see his empty tomb, so when the word first arrived that Mary had seen the Lord, they sounded like empty words. So, I want to ask you all if there’s ever been a time when all the things that we religious people say, when all the things that Christians say, have sounded like empty words. Has there ever been a time in your life when the things that people say, people who genuinely seem to have faith, didn’t generate any faith in you? If so, would you raise your hand?

If you gave me pen and paper, I could fill it in just a few minutes with the things “people of faith” have said to me that didn’t bring me one inch closer to faith myself. “When God closes a door, he opens a window.” “Let go and let God.” “God doesn’t give us anything we can’t handle.” But not just the easy targets, not just the stock phrases that somewhere, way back, come from some real, felt experience of faith; but the personal testimonies as well. In fact, at times in my life when my own faith has been at its weakest, when I have been filled with doubt in the reality and the presence of a loving God, hearing someone else say “I have seen the Lord” in some truly genuine way has been almost painful. “Why,” I might think, “is that person so certain when I am so uncertain?” I won’t ask you to raise your hands, but I will ask you to examine your hearts this morning, and see if you don’t hear a voice like that, your own true voice, asking that kind of question.

So, when it was evening on that day, the first day of the week, the day Mary had returned from an empty grave with the news that she had seen the Lord, had seen Jesus — not dead, but alive — that day found the followers of Jesus in the house where they had grown accustomed to meeting. Despite Mary’s testimony, they had not left the building, they were not out looking for their friend, they were not conducting a door-to-door search for the teacher they had loved. They were hiding out of fear of the religious authorities that had engineered Jesus’ death.

What kind of fear is that? What kind of fear would it take to keep you committed to your doubts rather than open to your hopes? Because, surely when Mary came back to the house with her incredible story, some part of each of the disciples had to have said, “she’s lost her mind!” Maybe out of grief, maybe out of shock, but this simply can’t be true. But, some other part of each of the disciples knew that it could be true. That the one who had changed water into wine, who had healed the sick, and restored sight to the blind, and fed the multitudes, and walked on the waves, and brought Lazarus back to life, that if there was anyone who might have emancipated himself from the slavery of the grave, it would be Jesus. But they stayed in the house out of fear, because they saw what people with power had done to the leader they loved.

If you have, if you’ve known that kind of fear, the fear of failure, of disappointment, of defeat, then imagine how you might feel if the parent, or the coach, or the teacher, or the leader that you loved and admired came and found you, locked away, hiding the gifts they’d nurtured in you, squashing the hopes they’d invested in you, giving up.

I suspect we’ve all done it at one time or another, given up, in ways both big and small. We start early and keep practicing as we get older. We give up on the instrument or the sport we loved as children, giving up on playfulness altogether as we get older. We give up on our friendships with the odd child in school, giving up on all sorts of outsiders as we enter adulthood. We give up on math, or science, or writing, or whatever subject most challenged us as children, only to find ourselves giving up on all sorts of dreams for our careers later in life. We give up on love, on our first love, on the idea of love, and we spend our lives wondering if we will ever find love, ever keep love, ever trust love. We know what it’s like to give up, to hide from the lives we once dreamed of having.

And when someone finally comes and finds us hiding from ourselves, what do we expect will happen? I expect to be scolded or shamed or blamed. I expect to feel embarrassed, even humiliated. I expect to be fired, or dumped, or abandoned. And the fear of each of these outcomes pushes me further and further into that locked room, until I’m somewhere in the back, under the desk, under the covers, hiding, hoping that no one will see what a disappointment I’ve turned into.

You don’t have to raise your hand. We’ve all been there.

The doors were locked that day, but Jesus had told them “I am the gate. Whoever enters by me will be saved, and will come in and go out and find pasture” (John 10:9). The one who couldn’t be kept in a grave, certainly couldn’t be kept out of the homes and the hearts of those God loved. So, disregarding every stone blocking the tomb, every lock blocking the home, Jesus came back — not to blame them, or shame them, or fire them, but to free them. 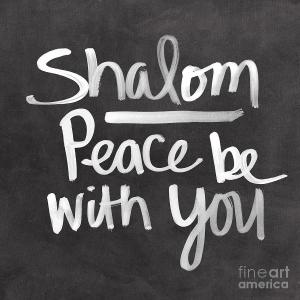 “Shalom,” he says. “Peace be with you.” It means “peace” and “be well” and “greetings” all at the same time. It means, we have come into one another’s presence and my desire for you is that you be whole, and well, and that there be peace between us. It is the reign of God come near. With that word they are set free and they see that the Lord is still with them. So, a second time Jesus says, “Shalom. As [God] has sent me, so I send you.” Because, in addition to meaning “hello,” shalom also means goodbye. It is a word that both receives and sends the one being addressed. The act of being set free is one and the same with the act of being sent out to free and liberate those still trapped behind locked doors. For this reason, Jesus says to them “If you forgive the sins of any, they are forgiven them; if you retain the sins of any, they are retained.”

Far from endowing the disciples with special powers, what Jesus is doing here is describing a basic spiritual principle; the very one, in fact, that they have just experienced. By announcing peace to people trapped by their own fears, Jesus has set them free.  Now Jesus tells them that they have been called and commissioned to do the same, to announce peace to all who still live lives of desperation turned inward as self-loathing, turned outward as violence in thoughts, words and deeds.

Remember that in the gospel of John, “sin” isn’t so much a moral transgression, its a lack of relationship. All throughout John’s gospel, Jesus has been bringing people to belief: the woman at the well, the man born blind, the sisters at the grave. Even after his own death and resurrection, Jesus is still working to bring people to belief — belief that there is no power that can bind the power of God welling up on God’s own people, no power that can keep locked the doors of our hearts, or our minds, or our futures which are all secured in God. So, when Jesus sent the disciples out with the power to forgive or to retain, he is pointing to the reality he has just demonstrated for them. If they will forgive people’s fear-driven behavior, if they will announce shalom, peace, well-being, as they greet and send one another, then sin will be cease to hold any power in the world. But if they refuse to announce shalom, peace, well-being; if they come with blame and shame and dismissal, then the world will continue to cower behind locked doors and fear one another.

We are still learning this lesson. We are still coming out from under the desk, under the covers. We are still waiting for Jesus to open the door. It happened for Mary early that day, it happened for the disciples later that day, it happened for Thomas a week later, in that same place where they were accustomed to gathering.  So maybe it happened for you last week, early in the morning, when you heard Peggy singing “O happy day, when Jesus comes” and Kerry singing, “clap your hands if you know that happiness is the truth.” But maybe it came for you later that day, as you looked back and realized that something had broken loose in you, a joy, a hope that you thought was dead, but you sensed coming back to life. Or maybe it took an extra week, and you had to come back to the scene of the miracle to see if it would happen again for you.

The point of the story isn’t about how quickly you experience God’s appearance in your life. The point is how consistently God will keep showing up, week after week, person after person, announcing peace to people trained for war, announcing well-being to people committed to misery, so that we may come to trust God, and in that trust find new life beyond every door.