As books of the bible go, Leviticus has kind of a bad rap, mainly because of its preoccupation with rules and laws.  This is, after all, the book that gave us such gems as:

It shall be a perpetual statute throughout your generations, in all your settlements: you must not eat any fat or any blood. (Lev. 3:17)

which rules out the best steaks I’ve ever had, and

You shall not round off the hair on your temples or mar the edges of your beard. (Lev. 19:27)

which I regularly defy every time I pull out my electric razor; not to mention a range of laws defining who you may and may not lay with that has left many of us a little beaten and scarred in the great culture wars of the last fifty years. So, it’s not often that I preach on Leviticus.

The lectionary seems to have picked up on our aversion to this book of the bible, since this morning’s passage is actually the only time we’ll hear from Leviticus all year long.  That’s right. In an odd twist of liturgical fate, the book of the bible most often cited to support legislating human behavior is one of the least read books of the bible, at least in terms of the portions we read together in worship.

Lucky for us then that the passage we read this morning is a bit of a greatest hits medley from the book of Leviticus.  Today we hear verses that sound quite an awful lot like the Ten Commandments,

And we hear words that we associate with Jesus, though he himself is quoting Leviticus,

But the verses I want to inspect with you for just a few minutes this morning are not that familiar and, on the surface, not that applicable to our everyday lives. The passage we hear Jossy read this morning begins,

When we study rules and laws, one generally safe assumption is that the rule exists because it has already been broken.  We don’t tend to make rules about things no one does, or ever could do.  We don’t legislate how quickly pigs are allowed to fly, or how much wood a woodchuck may chuck if, in fact, a woodchuck can chuck wood.  But Leviticus does set rules for how a landowner should go about reaping the harvest for which she or he has labored.

Apparently in ancient biblical times landowners would become so zealous to make a profit from their hard work that they would strip their vineyards bare, they would gather not only the grapes of the vine, but the ones that had fallen to the ground as well.  Whatever could be used to make the wine that sold at market and brought wealth and security to the landowner’s family.

Actually, come to think of it, this just sounds like good business.  The whole point of laboring all throughout the growing season is to bring in a harvest that will generate a profit, after all.  Landowners don’t go into business, whether in the vineyard or in real estate, to just get by.  They work, and often they work very hard, in order to turn a profit. To do well for themselves and their families.  In fact, not just land owners, but all kinds of business owners, work under a set of governing assumptions about the way the market works.  Assumptions like the idea that supply and demand are the best way of determining the value of a good. There’s nothing terribly Machiavellian about that idea, it’s just business as usual.

That’s what makes this law, buried in the book of Leviticus, so provocative to me. It seems to suggest that there’s something flawed, something wrong with some of the most basic structures that undergird our ways of interacting with one another. 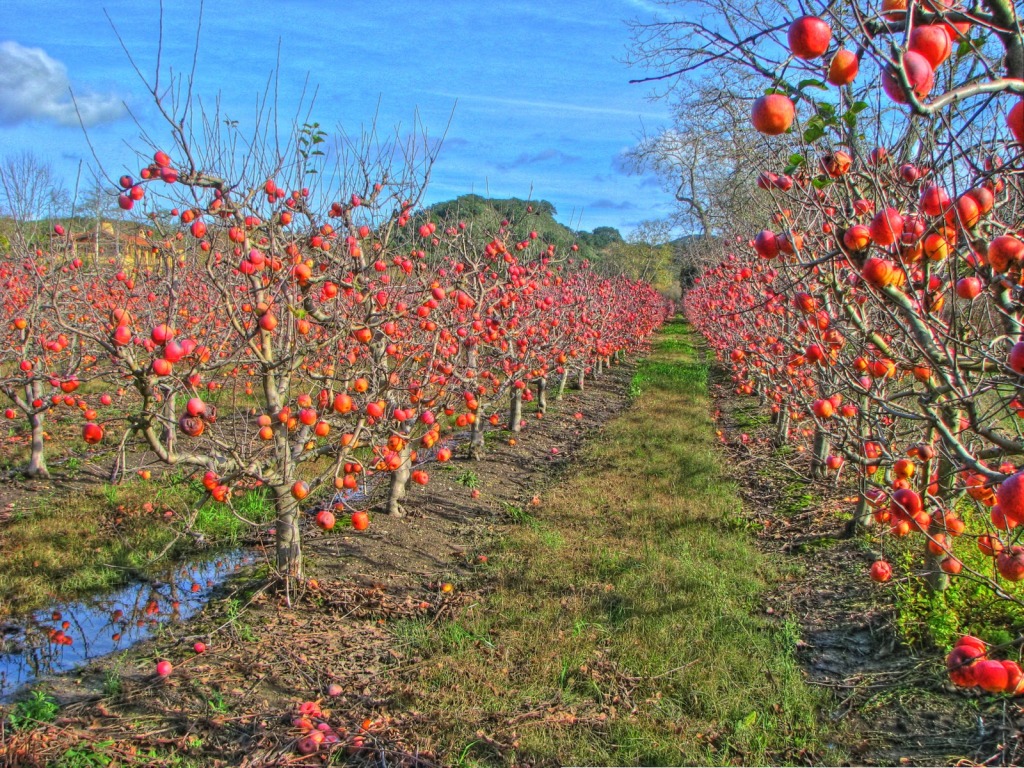 There’s something poetic about the way this law is stated: “you shall not reap to the very edges of your field… you shall not strip your vineyard bare.”  It paints a picture.  Sometimes I go apple picking in the fall, around October, so I can bake some real homemade apple pies. If I go late in the season, I can see that the trees have already been picked over. The low hanging fruit has already been harvested, and now all that’s left are the hard-to-reach apples, or the ones that have fallen on the ground and already begun to rot just a little.

Leviticus imagines a very different kind of operation, one in which not only the easy money, but the marginal profit has been squeezed down to the very last penny.  If a good has any value at all in the free market, then it belongs to the owner who is entitled and even expected to strive to get the highest price she can; even when the good, the item being sold, is something required for life. Something like food, or housing.

If you’ve been at Community Dinners, then you’ve seen this Levitical law at work.  We serve food from the second harvest — leftover bread from Panera, vegetables from the Greater Chicago Food Depository that was sourced from larger food distributors and producers. In the summer, we send volunteers out to the Logan Square Farmers’ Market to gather the gleanings of that harvest for the poor and the alien in our land. There is a generosity of spirit and a beautiful kind of neighborly friendship that has developed between Pat and Dorothea Kuhlman and the farmers who wait for them each Sunday, knowing that the leftovers that didn’t sell will still provide for people who need what the land produces, whether they can afford it or not. There is a law at work, deeper than supply and demand, that these landowners and laborers remember: that we belong to each other, that we rise and fall side by side, that we’re all in this together.

A few months ago I got a call from Terry, one of the guys who volunteers regularly at the Community Dinners, some of you know him pretty well.  He lives in the neighborhood, he helps source some of the food we serve and he’s handy in the kitchen.  He’s also fighting the mass evictions going on in his building and in scores of other buildings in the blocks surrounding his home.  A handful of housing developers, and one in particular, are buying up properties in Logan Square, issuing 30-day notices to residents — many of whom have lived there for decades with their families — and flipping the units.  Cosmetic upgrades: a new refrigerator and some marble counter tops, and then the rent goes up a few hundred dollars a month, or it doubles. The point being, the people, the families, our neighbors are gone. Where they go, who knows? Certainly not into the hundreds of boarded up units of public housing sitting vacant at Lathrop Homes for the last fifteen years.

Terry wanted to know if the churches could help.  You see, there’s a story going around the neighborhood about a handful of congregations who leave their buildings each spring to occupy the public square and demand an end to business as usual in our homes, in our streets, throughout our government and all of society. They wave palms and carry signs that read “I was a stranger and you welcomed me” and “en los ohos de Dios, todos somos iguales.”  There’s a story that these churches marched through the ghost town at Lathrop Homes in the dead of winter, knocking on doors to ask if there was room for Mary and Joseph to come in from the cold.  Terry’d heard that story, and he wondered what it meant for people like him, neighbors fighting to keep their homes in the face of landowners reaping to the very margin and stripping the streets of Logan Square bare of any trace of affordable housing.

Not every injustice is illegal, in fact most injustices have been made legal by laws that support a vision for our life together as human beings that privileges power over people, money over mercy.  The fact that a thing is legal, that it can be done, doesn’t mean that it should be done.  But we get confused.  Isn’t that what we were all taught to be?  Good, hard-working, law-abiding citizens.  Even when the laws seem stacked against us, when they tell us where we can live or who we can love; even when they seem to strip us of the things we need for life — food to eat, a warm home, a living wage, affordable healthcare.

When Jesus says, “You have heard it said, ‘an eye for an eye and a tooth for a tooth,’” he’s talking about the law.  The saying comes from a legal principle of the Roman empire that lives on in our legal codes today. We hear it in sayings like, “let the punishment fit the crime.” It is the kind of law that fits well in an economy of scarcity, in a worldview ruled by fear that there isn’t enough and that we must each fight our whole lives long to get what we can, and to keep it.

By contrast, Jesus says, “if anyone forces you to go one mile, go also the second mile. Give to everyone who begs from you, and do not refuse anyone who wants to borrow from you” (Matt. 5:41-42). It is a divine logic, rooted not in compensation and proportional retaliation, but in compassion and solidarity.  Jesus, drawing on the wisdom of his Jewish heritage paraphrases the book of Leviticus, “You have heard that it was said, ‘You shall love your neighbor and hate your enemy.’” Then he expands upon the law,  “But I say to you, Love your enemies and pray for those who persecute you, so that you may be children of your Father in heaven.” These are the kinds of laws that fit well in an economy of grace, in a worldview ruled by the assurance that there is already always enough and that we can trust that the care we provide to others will also be provided to us.

Two very different economies — the economy of scarcity and the economy of grace.  Two different sets of laws.  Echoes of last week’s reading from Deuteronomy, “choose life, that you and your descendants may live,” (Deut. 30:19) and Jesus, who has been delivering this sermon on the mount for weeks now, “do not think that I have come to abolish the law or the prophets; I have come not to abolish but to fulfill.” (Matt. 5:17)

There is a movement building in Logan Square to protect our neighbors, to stop the mass evictions, to call upon our elected officials to support us in this cause, and to recognize that land and housing are more than just a commodity to be bought and sold in the marketplace for whatever value the law of supply and demand dictates. To recognize that every good needed for life must be treated as a right for the poor and the strangers among us. It is a movement toward an economy of grace, and we’ve been called, literally, by a neighbor who saw us marching out in the streets and wondered if we meant it.