In the church’s calendar of annual observances, this past Friday was the commemoration of Luke, the evangelist to whom the third gospel is attributed which we have been reading in worship this year, and for which our congregation is named. Appropriately then, Luke’s gospel is marked by a number of strong themes that have left their mark on us as well.

In the gospel of Luke, Jesus is portrayed as being in the line of prophets of Israel like Elijah and Elisha leading a movement for social renewal. The focus of his action is overwhelmingly earthly. His great sermon is not on the mount, as in Matthew’s gospel, but on the plain, down to earth. In Luke’s beatitudes, Jesus teaches “blessed are the poor,” not the “poor in spirit,” but “the poor.” Not “those who hunger and thirst for righteousness,” as Matthew would have it, but “those who hunger.” Period.

As strongly as Luke’s gospel issues a call for action, here and now, it also reveals the importance of prayer. Instead of beginning with a genealogy of Jesus’ ancestors, as in Matthew; or with John the Baptist heralding his arrival, as in Mark; Luke’s gospel begins with the story of John the Baptist’s parents, Zechariah and Elizabeth, and the whole people of Israel in worship and prayer.  When the time comes for John to baptize Jesus at the river Jordan, it is Luke’s gospel that says, “when Jesus also had been baptized and was praying” (Lk. 3:21). Throughout his ministry, Jesus retreats from the crowd that follows him so that he can pray. Jesus teaches his followers to pray. Jesus faces his death with prayer. The message is not subtle: the world-changing mission of God requires strength, persistence, and patience — all of which are developed through a life of prayer.

Prayer, as I think about it, is kind of like broccoli or working out or Sunday worship.

When it’s well prepared, not boiled down to a mush, but steamed and salted and served with butter and garlic, broccoli is one of my favorite vegetables. It’s delicious and satisfying. I can eat a single serving of broccoli and be completely pleased with the experience.

Likewise, from time to time when I make it to the gym for a spin class, it can be exhilarating. I climb onto the bike, the music kicks in and keeps me motivated, my heart starts pounding and sixty minutes later I leave feeling exhausted but alive, proud of myself and pleased with my performance.

Neither broccoli nor bicycling deliver their maximum benefit, however, when done once. As delicious and exhilarating as each may be, it’s only when they become a routine, a habit, that we see changes in our lives. Daily servings of vegetables, not single servings, are the best way to make sure our bodies have the wide array of vitamins and minerals they need to operate efficiently and rebuild themselves. Regular exercise, not occasional work outs, strengthens our muscles and bones and keeps us healthy throughout our lives.

The same is true for Sunday morning worship, and for prayer.

Dropping by Sunday morning worship every once in a while is a wonderful way to stay connected to people, to experience the joy of making music in community, to carve out some time for reflection on our lives. Even a single worship service can be beautiful and inspiring, as at Christmas or Easter. Yet, as many of us know, the life of faith is deepened and strengthened not by a single worship service, but by the pattern of life that comes from regularly confessing our shortcomings and failures, being reassured of God’s mercy and forgiveness, hearing and reflecting on the wisdom of our ancestors, praying for the needs of the world, and enacting God’s vision of abundant life for all through the equitable distribution of God’s gifts at the Lord’s Supper. A single worship service might entertain you, but a life of worship changes you.

This is true of prayer as well.

I visited our sister Dea on Friday, who has been away from worship for much of this year because of her knee replacement surgeries and the long periods of rehabilitation that follow. She’s still at the Imperial rehabilitation center at Fullerton and Southport, and when I dropped by her room she was sitting up next to her bed with her crosswords and a novel on her tray. We chatted for some time and I asked her how she was spending her days.

“We pray,” she said, motioning to the woman sleeping in the bed next to hers. “We pray every day, often.”

Despite the pain in her legs, the various stresses and sorrows in her life, Dea says that prayer keeps her not only strong but satisfied with what she has been given. I ask her what she prays for and she says, “it’s not what I pray for, it’s the praying itself. I pray for everything — the sun in the sky on a clear day, or the rain when it’s cloudy. I’m just so grateful to be alive.” As our visit was wrapping up, we held hands and prayed together, finishing with the Lord’s Prayer. As we opened our eyes, I could see the confidence in her eyes. “It’s all going to be alright,” she said as we spoke our goodbyes.

Strength, persistence, and patience are developed through a life of prayer.

After Jesus teaches his followers how to pray, he continues to speak to them about prayer.

Taken out of context, as these verses too often are, it might seem as though Jesus presents prayer as a means to getting what we want out of life. This is why it’s important that we read scripture outside of worship, that we study it in sections longer than we can read during a single worship service, because when taken as a whole it’s clear that Luke’s gospel doesn’t imagine prayer as a means to getting what we want, but as part of God’s method for giving us what God wants for us: the Holy Spirit, justice, and the “kingdom” — Jesus way of talking about God’s vision for our life together here on earth.

To illustrate the point, we hear in the gospel portion assigned for this morning

Then Jesus told them a parable about their need to pray always and not to lose heart. He said, “In a certain city there was a judge who neither feared God nor had respect for people. In that city there was a widow who kept coming to him and saying, ‘Grant me justice against my opponent.’ For a while he refused; but later he said to himself, ‘Though I have no fear of God and no respect for anyone, yet because this widow keeps bothering me, I will grant her justice, so that she may not wear me out by continually coming.’”

Jesus goes on to assure his followers that if the unjust judge will give justice because of the widow’s persistence, then surely God — who is just — will do as much for God’s chosen ones. 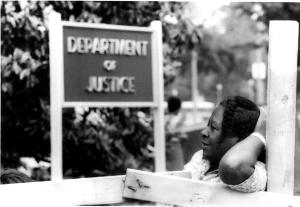 In this lesson on prayer it’s important that we notice a few things. Firstly, notice how quickly a lesson on prayer becomes a conversation about justice. In this story Jesus casts the role of the hero not with the most powerful person in the parable, the judge, but (once again) with a widow, like the one who gave her last coin in the temple, like the one whose son’s Jesus raised from the dead.

Jesus keeps looking for the most vulnerable people in any gathering, and he lifts them up, not simply as objects who deserve our charity, but as subjects with agency who have something to teach the world about the reign of God. The content of this widow’s demand, which is presented as an allegory for what we are being taught to pray for, is justice.

Secondly, we notice that prayer only changes this situation because it is ongoing. It’s not a single serving of broccoli, or a great spin class at the gym, or even worship at Christmas and Easter. It is continuous, unceasing, persistent prayer. The unjust judge finally gives in, not because the widow is right in her demand for justice, but because she refuses to be quiet about it.

How often have we found that to be the case in our own lives? The easiest examples may be the global, societal changes brought on by tireless activists who keep sounding the alarm that the world as it is is not the world as God intends it to be. Who keep lifting up the plight of Syrian refugees, the needs of the uninsured across our nation, the lack of affordable housing in our city, and the defunding of programs to feed the hungry in our neighborhood.

But the struggle for justice takes place in less visible and more intimate settings as well. It is the prayer of the parent who advocates for the needs of her children. It is the struggle of spouses to speak to each other with respect and to honor the vows made in marriage. It is the student who braves bullying and fights to maintain dignity and pride walking down the hall in between classes. These situation, the ones that may never make the news, the ones you may be dealing with, also require unceasing prayer that God’s justice might change the circumstances that each of us faces at home, at school, at work. 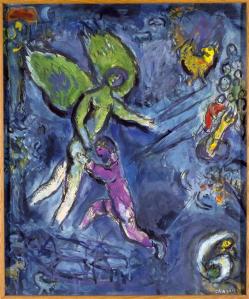 But prayer doesn’t simply change the word, and the way in which it changes the world is anything but simple.  Prayer changes us. We see this most clearly in the story from Genesis of Jacob wrestling with God by the river Jabbok.  Like the widow before the unjust judge, Jacob persists in a relationship that feels like struggle, one that even leaves Jacob wounded for life. However, Jacob is so profoundly committed to this relationship, engaged in this struggle, that his very name is changed. He becomes Israel, a name that means, “persevere with God,” because he had “striven with God and humans and [had] prevailed.” (Gen. 32:28)

Whether our prayers for justice are for the world, or for our families, in the end it is we ourselves who are most immediately changed. The wayward Jacob becomes Israel, the father of a new nation. The people gathered for worship and prayer at the beginning of Luke’s gospel become the witness to the resurrection and the foundations of the church in the follow-up to Luke’s gospel, the Acts of the Apostles. The widow becomes the hero of her own story.

Through prayer, we too, are being changed.