If you were here last week, you’ll remember that I’ve fashioned myself a professor of sorts for these Sundays in Lent leaning into Holy Week and the Three Days that precede the festival of the resurrection at Easter.  This morning I want to tell you the name of the course in which you’ve unwillingly enrolled.  It is “Mystagogy 101: Christian Initiation.”

Mystagogy is probably an unfamiliar word, so let’s work our way into it with a word that may be a little bit more familiar to at the least the teachers in the room, and that word is pedagogy.  If you’ve taken any coursework in education, or spent much time in schools, then you know that pedagogy is the study of how to teach.  The word itself, though, teaches us something more.  The “peda” in pedagogy is the same root as the “ped” in pediatrician.  It refers to children.  The “gogy” in pedagogy comes from the Greek for “to lead.”  So “pedagogy” literally means, “to lead the child.”  Learning how to teach is learning how to lead young people into maturity.

Mystagogy, then, is also about leading — but rather than leading youth into maturity, it is about leading people into mystery.  Mystery, here, is not being used in the sense of a good crime novel or police procedural on television.  Mystery here is being used, again, in the ancient Greek sense, in which a mystery was understood as the beliefs, rites and rituals that were only made known to the initiated.  Mystagogy is about leading people into their initiation — and for those already initiated, leading them deeper into the meaning of what it means to belong to a mystery.

Lent is mystagogy.  Lent is the season of the church that, for millennia, has been used as a time of preparation for the central rite of Christian initiation, which is baptism.  And, since I’ve imagined this to be a course, I’m going to ask you once again to open your textbooks — in this case, the red hymnals in the back of the pew.  Turn to page 227, which is the beginning of the rite of Holy Baptism, the rite of Christian initiation.

“God, who is rich in mercy and love, gives us a new birth into a living hope through the sacrament of baptism.  By water and the Word, God delivers us from sin and death and raises us to new life in Jesus Christ.  We are united with all the baptized in the one body of Christ, anointed with the gift of the Holy Spirit, and joined in God’s mission for the life of the world.”

“In baptism our gracious heavenly Father frees us from sin and death by joining us to the death and resurrection of our Lord Jesus Christ. We are born children of a fallen humanity; by water and the Holy Spirit we are reborn children of God and made members of the church, the body of Christ.  Living with Christ and in the communion of saints, we grow in faith, love, and obedience to the will of God.”

A little over a decade ago, one of my best friends from childhood — a young woman who’d grown up in the church with me — had just given birth to her firstborn child.  People in her family were asking when the baptism was going to be, but she was really struggling with idea of having her son baptized.  “People tell me I have to have him baptized to remove the stain of original sin,” she said.  “But I look at my son and I don’t see sin, I see perfection.  He hasn’t done anything wrong!  Why does he need to be baptized?”

That’s a mother talking, with the kind of fierce love that parents have for their children.  We hear Jesus speaking with that same, fierce, motherly love in this morning’s gospel as he grieves for the city of Jerusalem.  “Jerusalem, Jerusalem, the city that kills the prophets and stones those who are sent to it!  How often I have desired to gather your children together as a hen gathers her brood under her wings, and you were not willing!” (Lk. 13:34)

I’ve been to Jerusalem, as have some of you.  In Hebrew the name Jerusalem means “City of Peace.”  Jerusalem is a city, yet like all cities it struggles with violence and crime.  Jerusalem is also a city of walls standing in the middle of a nation divided by walls.  Walls built to separate people from one another in response to generations of violence and occupation.  Walls of fear become walls of stone.

Traveling in Israel a decade ago I encountered a woman while visiting the village of Beit Jala, a small community of Palestinians about six miles south of Jerusalem, near Bethlehem, where Jesus was born.  I was standing with a group of my classmates as our guide shared with us that the homes we were looking at had been shot at by Israeli military forces all through the night earlier that month.  I could see the damage done by the shells in the sides of the homes, where concrete had been blown off in chunks.  As we stood there, this woman emerged from her home and approached us.  After we identified ourselves as Christians from the United States, she told us her story.  She said,

“They shot at our village all through the night.  Bullets flew through our windows, so I took my children in my arms and we hid under the bed.  None of us slept at all.  In the morning my son asked me, “why do they hate us?”  And I tried to explain that they did not hate us, but that they were scared.  That long ago their people were shot at and killed as well.  How can he understand?  Will there ever be peace?”

That mother’s anguish gave me the answer to my friend’s questions about sin and baptism.  To say that we are born children of a fallen humanity isn’t to say that there is some indelible sin etched onto our souls that can only be removed when we become Christians by virtue of our baptism.  It is to say that a child born in Beit Jala, or Jerusalem, or Humboldt Park, or Hyde Park has no say in the type of world they are entering.  They are coming into a world already characterized by fear, and violence, and walls.  They are coming into a world characterized by sin, the state of human separation from God and from one another.

The apostle Paul says, “our citizenship is in heaven.” (Phil 3:20)   The psalmist says, “if my father and mother forsake me, the Lord will take me up.” (Ps 27:10)  God speaks to a childless Abram who looks at the future through the eyes of despair and says, “look toward heaven and count the stars, if you are able to count them. So shall your descendants be.” (Gen 15:5) 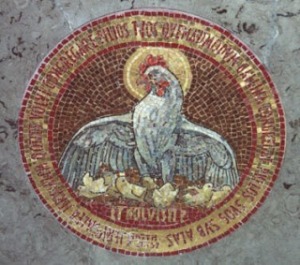 Here’s something I recently learned about chickens.  A hen has no issue with laying her eggs in another hen’s nest, and will sometimes move eggs from other nests into her own.  Some hens even share nests, and will end up sitting on top of each other to make sure those eggs are doubly cared for.

What an image for God, who could really care less what nest you come from, who only wants to be sure you are safe, and warm, and loved.

Pray for the peace of Jerusalem, and may the peace that passes all understanding be yours today and every day.