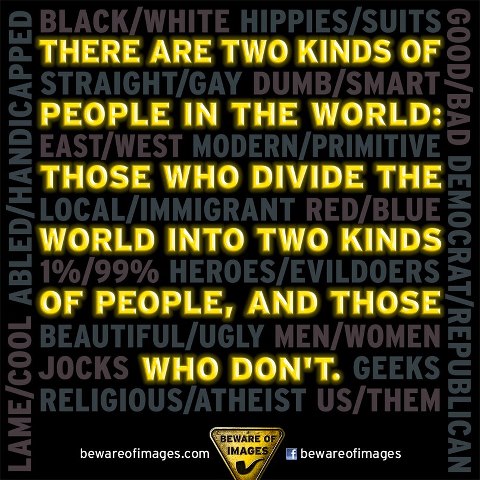 “There are two kinds of people in this world,” according to advice columnist Abigail Van Buren, “those who walk into a room and say, ‘there you are!’ and those who say, ‘here I am!’”

But, then again, “there are two types of people in this world,” said Mark Twain, “people who accomplish things, and people who claim to have accomplished things. The first group is less crowded.”

Oliver Wendell Holmes said, “people can be divided into two classes:” (which is the classy way of saying, “there are two kinds of people”) those who go ahead and do something, and those who sit still and inquire, ‘why wasn’t it done the other way?’”

And a century later Robert Frost said basically the same thing: “There are two kinds of people: some willing to work and the rest willing to let them.”

John the Baptist’s message is often paraphrased as something like, “there are two kinds of people: the wheat and the chaff. When the messiah comes it will become evident what kind of person each of us is.  The wheat will be kept, and the chaff will be burned away.”

And that’s the kind of religious talk that gets people nervous.  Basically, any time a preacher starts talking about anything burning people get nervous, including the preacher — unless that preacher is the kind of person Mark Twain called a liar — because burning, when said in church, sounds like a metaphor for hell, and we’ve all heard, somewhere along the way, that there are two kinds of people: the ones going to heaven and the ones going to hell.

There I said it.

But that distinction hardly settles things, because there are two other kinds of people: the ones who know where they’re ultimately going, and the rest of us.  Religion has tried to resolve that basic anxiety with all kinds of solutions.  In some brands of Christianity you know which group you belong to based on whether or not you’ve claimed Jesus as your personal Lord and savior.  To these Christians, there are two kinds of people as well — those who have and those who haven’t.

Other groups of Christians turn that formula around — it’s not a question of whether or not you’ve claimed Jesus, it’s a question of whether or not Jesus has claimed you.  So we begin to look for markers of who’s in and who’s out, and we start to treat the sacraments — visible signs of God’s invisible grace — as membership cards.  There are two kinds of people, we say, those who are baptized and those who aren’t.

Of course, there are two other kinds of people: the ones who believe in an afterlife and the ones who don’t give it much thought.  Honestly, you don’t have to care much about the afterlife — whatever that is — to see how these dualisms characterize our social interactions.  Whether you take to the streets on behalf of the 99%, or you dismiss half of the country as the 47%, you’re still saying that there are essentially two kinds of people: the ones in my bracket, and the ones who take from it.

Friends, it seems like there’s just something in us that can’t help but want to divide people into categories.  Don’t they essentially all end up as some version or another of “there are two kinds of people in the world: us and them.”  Or, in its very loneliest version, “me and everybody else.”

One way of understanding sin, another one of those preaching words that makes people shudder, is separation from God and from one another.  When we begin dividing the world into two kinds of people, sin isn’t so much a characteristic of the people on one side of that line as it is the distance between them.

When I listen to the story of Jesus being baptized at the river Jordan by John, I think, “there are two kinds of people in this story: Jesus, and everybody else.”  Jesus is the only character in this story that the church calls the messiah, the Son of God, the Word made flesh, fully God and fully human.  Something about the very names we give Jesus gets in the way of the either/or thinking that dominates our interactions with most people.  He isn’t only spirit, or only flesh.  He isn’t only God or only human.  He blurs the lines.

We might even wonder why Jesus was being baptized at all.  In fact, in Matthew’s gospel John says to Jesus, “I need to be baptized by you, and do you come to me?”  But Luke’s gospel, the one we read this morning, says

Now when all the people were baptized, and when Jesus also had been baptized and was praying, the heaven was opened, and the Holy Spirit descended upon him in bodily form like a dove.  And a voice came from heaven, “You are my Son, the Beloved; with you I am well pleased.”

What I appreciate about the way Luke tells the story is the way that Jesus steps over the line between people like him and people like the rest of us.  The Baptism of Our Lord is often referred to as the beginning of Jesus’ public ministry, and if that is the case, then I think it is important to notice that the first act of Jesus’ ministry is to step over, no — to wash away the line between the two kinds of people: the human and the divine, the clean and the unclean, the saved and the damned.  The reign of God is not for me or you, us or them, the 47% or the 53%, the 1% or the 99%.  The reign of God come near is for the 100%.

It turns out that there aren’t two kinds of people at all.  There is only one kind of person, the kind that God made.  There isn’t a person in this room who doesn’t already fall into that category. It doesn’t matter if you have claimed Jesus as your personal Lord and savior or not.  It doesn’t matter if you have a job right now or not.  Take a look at the welcome card in the back seat of your pew.  It doesn’t matter if you are a lifelong Lutheran, or just considering Christianity; if your family has been in the United States for generations, or has only recently arrived; if you are gay, lesbian, straight, bisexual or transgender; if you live with disabilities, chronic illness, or are able-bodied and currently healthy; if you are home-blessed or homeless.  You are one of God’s precious creations.  That’s the only kind of people there are.

The prophet Isaiah remembers the voice of God saying to those God created, “you are precious in my sight, and honored, and I love you.” (Isa. 43:4)  And as Jesus sits praying among the rest of the people baptized by John, not apart from them, God speaks again to say, “you are my child, the Beloved; with you I am well pleased.” (Lk. 3:22).

As we celebrate with our sister Jessica her decision to prepare to be baptized into the body of Christ later this spring, as we walk with her through the coming months of preparation, I want to be very careful that we don’t fall back into the “two kinds of people” thinking that comes too easily to us.  As Jessica prepares to be baptized we are not celebrating the fact that she is readying herself to move from one kind of person to another.  No, instead we are praising God that, in Jessica, there is now another witness to God’s reality.  In Jessica, there is now another messenger of the good news, another herald of the 100%.

We give thanks for the baptism of our Lord, and our own baptisms, because they are signs that God is claiming the whole world in love, and through love, and for love.  Amen.