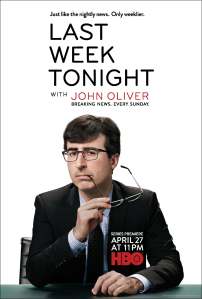 British comedian John Oliver has a new show on HBO that airs on Sunday nights called “Last Week Tonight.” Following in the style of John Stewart or Steven Colbert, Oliver doesn’t claim to be a newscaster, but his comedic take on the events of the previous week often feels more honest than the 24 hour coverage that comes through channels like CNN or FOX or MSNBC, or even the three broadcast networks. He doesn’t claim to be objective, he just reviews and comments on national and global events that have taken place since the last broadcast. Perhaps that’s why I feel a certain affinity for his show, produced and presented on a weekly basis to help people reflect on the state of the world around them.

Sometime in the last few weeks he opened his show by saying, “Last week was [bloody] awful!” and went on to talk about the humanitarian crisis on our southern border, the rising death toll in Gaza, the scandal of our poorly maintained nuclear arsenal, and at some point I couldn’t even take it in anymore. Even with the aid of his humor, I was drowning in a sea of bad news.

This is the challenge of the moment we are living in. The news from the front lines is relentlessly bad. This week we’ve been horrified by an outbreak of Ebola that continues to cross national borders and has claimed the lives of almost a thousand people. This week we’ve been told that we are once again committing to open-ended military action in Iraq. This week has been bloody awful!

So perhaps we can relate to the disciples who, after being part of a miracle of abundance with the feeding of the five thousand, are startled to find themselves in the middle of a storm with Jesus nowhere in sight.

Reading through the gospel of Matthew, this transition feels incredibly abrupt. At the beginning of chapter 14 we get the news that King Herod has killed John the Baptist, in response to which Jesus goes looking for solitude so he can be alone. But the crowds continue to press in on him, and Jesus responds to their need even in the middle of his own grief, refusing to send them away when their hunger appears to outstrip their resources. Having witnessed God’s power to provide first-hand, the disciples and the crowds are sent away so that Jesus can get back to his prayer. That very night, however, the disciples get caught in a storm out on the sea, and they are afraid that they will drown. The pace of the story is relentless.

I guess that’s what I’m responding to the most right now, the relentlessness of it all.  One minute we’re celebrating the birth of a child, the next minute we’re saying goodbye to a dear friend. One day we’re overjoyed at a decision to be married, the next day we’re navigating the choppy waters of fear and prejudice. One month we’ve welcomed a dozen members into the church, the next month we’re looking at our finances and realizing our current ministry plan is unsustainable and that big changes will need to be made or we will sink. One year we’re celebrating a decline in the rate of HIV transmissions across sub-Saharan Africa, the next we’re bemoaning an outbreak of Ebola.  One generation we think we’ve tossed off the shackles of racism and gender oppression, the next generation we find ourselves with the highest incarceration rate of any nation on the globe and women’s reproductive health care under attack.

We are sinking! Lord, save us!

This morning we also enter into the final cycle of stories in our summer long study of the book of Genesis.  The stories of Joseph and his brothers and their sojourn to Egypt will shape our worship for three weeks, during which time we will hear how a dreamer saved his people from a pattern of envy and violence that had been passed from generation to generation.

In this morning’s introductory tale we find that Jacob, having finally been reconciled with his brother Esau, has settled in Canaan. After all the pain that came from his jealousy at his own father’s favoritism, we might hope that Jacob would turn out to be fairer in his affection for his children. But it isn’t so. Jacob, who has been given the name Israel, loves Joseph more than any of his other children. Joseph is the firstborn son of Rachel, the favorite of the four mothers of Israel’s children. So Israel’s three other wives and eleven other children are left feeling neglected and unloved, and from that division comes all kinds of evil.

But there’s more to the story found in the verses that were left out of our reading, but hinted at when Joseph approaches his brothers at Dothan and they respond to the sight of his arrival, “Here comes this dreamer. Come now, let us kill him…” (Gen. 37:9)  In the missing verses, Joseph shares two dreams with his brothers.

He said to them, “Listen to this dream that I dreamed. There we were, binding sheaves in the field. Suddenly my sheaf rose and stood upright; then your sheaves gathered around it, and bowed down to my sheaf.” His brothers said to him, “Are you indeed to reign over us? Are you indeed to have dominion over us?” So they hated him even more because of his dreams and his words.

The irony, of course, is that these dreams do turn out to be true, but only because Israel’s other sons sell their brother into slavery.  As we will observe in the weeks to come, it is that act of jealousy and violence that sets Joseph on a course that will eventually create a path for his family to move from famine to abundance. At this first juncture of the story however, Joseph’s dreams only get him thrown into a pit where, like drowning Peter, he waits to be saved.

Paul, in his letter to the Romans, also calls to mind the image of the pit when he writes,

Moses writes concerning the righteousness that comes from the law, that “the person who does these things will live by them.” But the righteousness that comes from faith says, “Do not say in your heart, ‘Who will ascend from heaven?’” (that is, to bring Christ down) or ‘Who will descend into the abyss?’(that is, to bring Christ up from the dead). But what does it say? “The word is near you, on your lips and in your heart” (that is, the word of faith that we proclaim); because if you confess with your lips that Jesus is Lord and believe in your heart that God raised him from the dead, you will be saved. (Rom. 10:5-9)

Paul is contrasting two ways of thinking about our relationship to God. The first he calls “the righteousness that comes from the law” and he says that those who try to structure their life with God in this way will live as though it is their own actions, their own choices, their own power can save them. For this type of person, God is understood primarily as a set of rules or laws that must be obeyed in order for a relationship to exist. But Paul doesn’t equate this kind of legalistic religion with faith. Instead he says, “the righteousness that comes from faith” understands that we can’t climb into heaven any more than we can climb out of hell.  That salvation is a work of God’s not a work of our own.

It’s not hard to understand why this perspective is so challenging that even Christians have trouble embracing it.  “The righteousness that comes faith” flies in the face of everything we’ve been taught about how the world works, and how to get ahead in it. From the moment we are able discern difference and can see that some people are living lives of plenty and others are living lives of lack, we wonder why the world is as it is. The world has so many answers to give us. It tells us that some people are more deserving, more intelligent, more industrious. It tells us that God has favorites, families or nations or religions that hold a special place in God’s own heart.  It tells us that “God helps those who help themselves.”

Then we find ourselves in a pit our own family threw us into. Then we find ourselves drowning in a storm. Then we find ourselves in the middle of a divorce, or grieving the loss of a family member, or laid off with no work in sight, or going into foreclosure, or having to sell the house, or struck with an illness we’ve never heard of, or receiving the news that treatment isn’t working. At a time like that, what does “the righteousness that comes from the law” have to offer us? Not much. At times like that our hand thrusts up through the waters that threaten to drown us, groping for whatever help may be found, and we cry out “Lord, save me!”

At a moment like that, a moment in the pit, Paul says, “the word is near you, on your lips and in your heart.”  What good is a word to a drowning person? What world is Paul living in where a word has the power to make a difference in the face of envy, violence, war, or death? What kind of delusion, what kind of fantasy, what kind of dream is he living?

He’s living a dream called the gospel, which is good news to all who are drowning in sorrow, which is freedom from all who are trapped in a pit.  He is choosing to use the force of his words and the witness of his life to testify to the subversive, world-making power of dreams to become reality.

How can you think that Gaza will never be free when you have seen apartheid fall in South Africa?

How can you think Ebola will choke the life out of Africa when you have seen the world come together to end polio, to fight AIDS?

How can you think a crumbling sanctuary or a shifting foundation will bring an end to our story, when you have seen God use our networks of relationships to feed hundreds of hearts and souls and bellies with leftovers to spare.

How did each of these triumphs of God begin? With a dream. With a vision that the world as it is could not resist the world as God intends it to be. With faith that the God who called us into ventures whose endings could not be imagined did not bring us this far to let us drown, or die, but that our God faces the chaos of our lives and all their storms and draws us close, catching us, saving us.